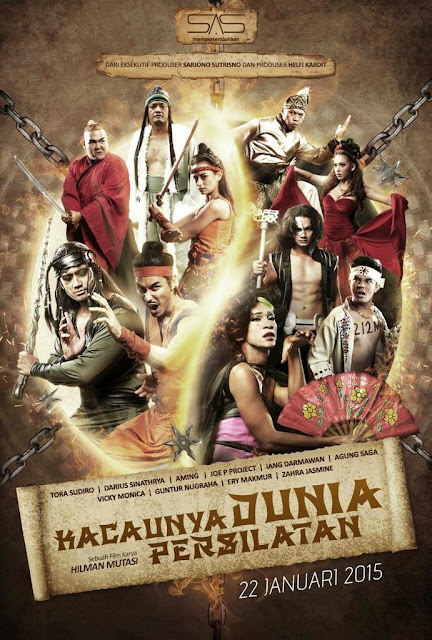 Standards and expectations for quality martial arts action aside, some directors aren’t afraid to get a little crazy. Such is the case for Indonesia’s latest upcoming fantasy action comedy, Kacaunya Dunia Persilatan (translated as Chaotic Martial World) from Skylar Pictures, whose director, Hilman Mutasi doesn’t mind going for a bit of Stephen Chow flare here.

There’s no synopsis I can find at the moment, although some Google translating did reveal a bit of the film’s basic plot which centers on the search for a missing heirloom, a sword that could define the fate of the martial world. At any rate, the new trailer is below, and though I’m pretty sure there’s a plausible story involved, this one should be pleasing for the action fanbase to some degree, if not worthy of at least a Facebook *like*.
Tora Sudiro, Joe P. Project, Amink, Darius and Atiqah Hasiholan are the names rounding off much the cast for the new film which releases domestically next month. Check it out beneath!