Fans of acclaimed filmmaker Cheng Wei-hao’s recent work on The Tag-Along movies may take a liking to the subliminal poetry that coaleses in the grim, horrific millieu of his latest thriller, Who Killed Cock Robin.

Hand-held cinematography goes hand-in-hand with Cheng’s vision as it takes a life of its own, loosely iterating its own incarnation of an old English poem with a narrative aptly suited for the film’s title; More than a murder mystery, Cheng unravels a tale of sex, greed and malfeasance drenched in a mystique of rainy weather and dour blue filters with a dark tint that almost never lets up.

It all unfolds as we first meet Chi (Kaiser Chuang), an ambitious young journalist recently promoted at his job working for a newspaper. When his questionable practices become the lynchpin for a spate of layoffs, he sets off to make use of his time researching the origins of his car following an accident after which he learns about its previous owner.

With help from his former supervisor, Maggie (Hsu Wei-ning), their investigation brings them to the apartment complex of a reclusive landlord named Hsu who neither wants nor cares to get involved in Chi’s inquiry. What follows is a grim spate of revelations with serious consequences that ultimately serve as a testament to how far Chi is willing to go in order to unearth the truth about what happened nine years ago.

To say the least, Who Killed Cock Robin is all about what happens in the first five minutes of the film – everything from what Cheng allows you to see to what he obscures lends rewarding to Cheng’s ability to string viewers along as he doles out little nuggets of truth as the minutes pass.

The rest of the film is all about piecing together the pieces Cheng gives you from start to finish. You’ll be compelled to perceive something one way before seeing it another, but that’s only until you see something else unravel that helps it make sense. There is a tendency to throw off the viewer between flashbacks and flashforwards, although this does bode far less detriment to the film the more interesting things get.

Needless to say, if you’re compelled to watch Who Killed Cock Robin a few more times, it wouldn’t be too much of a task. Cheng crafts a nimble story of murder and mystery that elevates into something far more consequential, mesmerizing and transformative in its own way.

Chuang and actress Hsu lead off with incredible performances to get the pace going, followed by those of Christopher Lee who plays the chief editor, and actress Ko Chia-yen in the role of Hsu. Mason Lee (The Hangover: Part II, Duckweed) covets the part of Cheng-wei, a seemingly straight-laced junior police officer new to Chi’s shared chemistry with the station’s higher-ups. 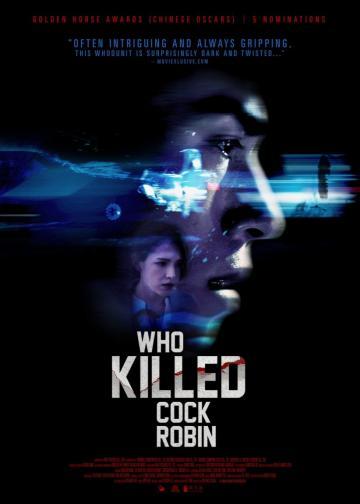 The crux of Who Killed Cock Robin is much ado with the element of penance and questions of worth than anything. The hit-and-run sequences add to the imminent danger of select moments, one of which stands a bit ominous, though you’ll only notice that if you keep watching, and again, a few rewatches wouldn’t hurt.

Who Killed Cock Robin is a tale ripe with a number of suspense and horror tropes with a touch of sex and corruption thrown in the mix. Enthralling and stimulating in its pulp-style character development, the film recapitualtes with an ending only as cathartic as you’ll allow yourself to feel given that the imagery in the third act is not for the faint of heart.

All in all, Cheng’s newest offering is one of the wildest and scintillating psychological thrill rides you’ll ever sit through, and after a few breaths, you’ll be back for seconds just to make sure your head is still on straight.

CURFEW: The Race Is On In The Official Trailer For The Spectrum Originals Action Drama Series PROMARE: GKids Scores A Fall Event Release For Trigger’s Feature Debut