Brothers At Arms Test Their Might In Episode Two Of CAMBODIAN KILLERS. Watch It Right Now! 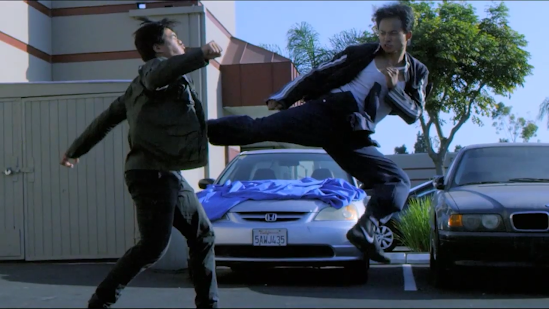 It was last October that actor, martial artist and filmmaker, Usurp Productions’s own D.Y. Sao took a leap forward in telling his own story with the new action miniseries, Cambodian Killers. While experimental at its core, the project has so far been a telling phase of progress for Sao as he moves up in film, and, like other indies, it does drive the imagination toward wondering how even more awesome it would be in its perpetuity if the right people came on board to help make this into something bigger. Having partly partaken in this project myself, I’m pretty biased here and I would proudly welcome it.
Billed with a cast of talented actors in action cinema with Sao leading, Cambodian Killers focuses on a tale of brotherhood, turmoil, drama and danger that ensues when Joker, a reformed pugilist living in Cypress finds himself at odds with Aiko, a powerful Long Beach crimeboss and his underlings: the remaining members of Joker’s former kickboxing team. Sao stars and produces for Rock Man Stunts in association with Blue Kanji Films, with performances by actors Du Au and EMC Monkeys’ own Tony Sre, in addition to actors Jimmy Chhiu and Sam Puefua.
Be sure to catch the first episode in case you may have missed it. Otherwise, the second episode is now up and running and you can check it out below following last week’s teaser.