Some women collect shoes. And then you have Charlize Theron here sporting her own collection of sorts as per her latest casting as villain, Cipher, in the new movie, Fast 8 as seen in the new photo below.

More of these pictures are bound to emerge with filming underway much of the main players from the previous film returning, with Furious Seven cast members, Nathalie Emmanuel coming back for her second go-around as sexy hacker chick, Ramsey, and returning franchise co-star Lucas Black as former troubled youth-turned-self-redeemed Drift King Sean Boswell since debuting in 2006’s The Fast And The Furious: Tokyo Drift. 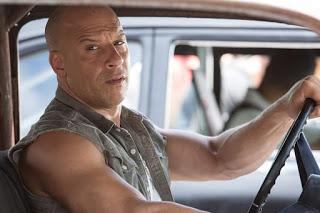 The film is opening on April 14, 2017, and with lead actor Vin Diesel’s shared hopes of bringing franchise co-helmer Justin Lin back to direct the final film no less, as the start of a new trilogy that will complete between April 9, 2019 and April 2, 2021 while Universal Pictures plots a slate of spin-offs. Stay tuned!
H/T: Collider