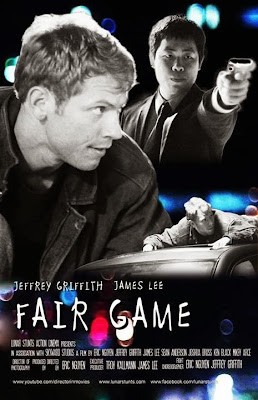 Lunar Stunts founders, independent filmmakers Eric Nguyen and Irvin Nguyen are looking to end 2014 with a bang in the form of their latest epic action short film, Fair Game. The piece was filmed around four months ago starring actor and stuntman Jeffrey Griffith and the team’s newest member, Mikey Arce, from a script written and directed by Eric about a consulting agent hired by a security agency to aid an escaped prisoner, only to learn the truth of his mission later on.

I contacted Eric on Monday to talk a bit more on the project, which has already seen its first teaser airing back in August. Eric has some pretty big ambitions to up the antee on a lot of the stunts and action for his future films, ambitions you can clearly see in the teaser as well as the video below. Furthermore, Eric expresses his experience with Jeffrey and Mikey has proven to be highly beneficial within each other’s services to one another on the set. “Jeffrey is always great to work with.” he says. “He’s always willing to push himself to get a good action scene filmed. It was definitely a great experience with the crew, and I thank them a lot because we filmed from 10pm to 4am every night.”

Eric also remained complimentary about Mikey Arce‘s own “AMAZING” progress as an up-and-coming actor, in addition to capable of pulling off key screenfighting techniques that work on camera. “He displayed intensity and speed that can match Irvin (Nguyen’s) without a doubt.” he says of Mikey. “And Jeffrey definitely taught Mikey a lot of things as well.”.
Eric is planning to release a full trailer for Fair Game either before, on, or after New Years. And as a big “thank you” to the folks in his gradually increasing list of YouTube subscribers and Facebook followers, Eric is unveiling a full fight scene. That’s right, an entire, complete fight scene, which he promises will not be a spoiler for those eyeing the premiere of Fair Game in its complete state. Besides, he says there will be plenty more action, car stunts and fight choreography in the upcoming shortfilm, so I think it is fair to say that aside from coordinating the stunt and fight work, Eric knows what he is doing.
There’s more in store for indie action fans and followers of the activity over at Lunar Stunts, including Eric‘s upcoming action comedy short with Irvin and Mikey titled, Nice Guy Hunter. Be sure to subscribe to their YouTube channel, and head over to the LIKE button on their official Facebook page.
Fair Game also stars James Lee, Joshua Bross, Sean Anderson and Ken Black. Stay tuned to Film Combat Syndicate for more information.

Adrianne Palicki Announces Her Return In G.I. JOE 3 The New Trailer For 3 DAYS TO KILL Is Here