FIGHTR Brings A Match Made In Black-And-Blue Heaven 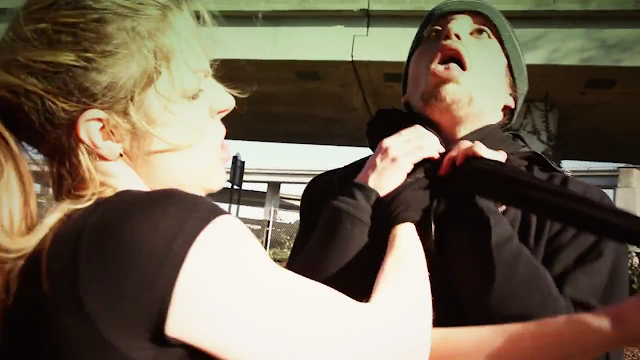 Are you feeling lonely? Are you in need of that special someone to help you work off some of that stress? Guess what! There’s an app for that, and actor and independent screenfighting action director Darren Holmquist is here to show you how to use it against fellow actress Jennifer Faust in the new test fight shortfilm, FIGHTR – Ultimate Fighting Phone App.

Be advised however, as curious as minds can be, this particular app doesn’t exist, but chalk another one up for the independent scene delivering another gem for the masses as Holmquist meets his lovely date, face first!
If the names are familiar to you, then you may recall a recent crowdfunder that launched for indie director Frank Hernandez‘s new spirited action revenge drama, Heart. And, in case you are not up to date, Holmquist and Faust are currently attached to the project, with further developments pending as we head into the remaining fifteen days.
In the meantime, you can watch Holmquist and Faust in action in the embed below, and if you’re interested, CLICK HERE to read our coverage of Hernandez’s Heart project.

CROWS EXPLODE With A New Trailer And TV Spot! Xerxes Gets A Shiny New Facelift In The New Behind The Scenes Featurette For 300: RISE OF AN EMPIRE