INTO THE BADLANDS: Sunny And The Widow Make Their Case In Two Slick New Teasers For The Second Season 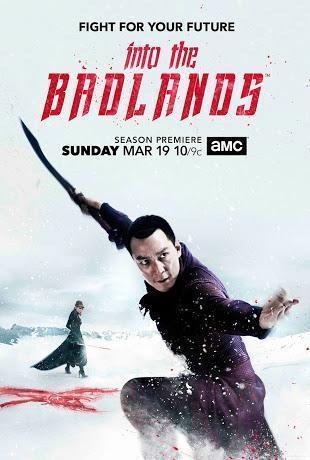 Actor Daniel Wu will be back to put a few more notches on his back in the role of Sunny in the upcoming second season of AMC series, Into The Badlands. Joining him, of course, is Emily Beecham as the bloodthirsty widow and both are here this week to set the dark, grim tone for swordswinging, brutal and deadly revenge and retribution.

Into the Badlands Season 2 finds Sunny (Daniel Wu) and M.K. (Aramis Knight) separated and scattered to the wind, each imprisoned in unlikely places.  While M.K. struggles to control his powers, Sunny is determined to fight his way back into the Badlands to find his family or die trying.  On their journey, Clipper and Colt are assisted by mysterious, new allies whose motivations may be anything but pure.  Meanwhile, The Widow (Emily Beecham) continues to consolidate power against the other Barons, while a dark and mysterious threat prepares to exact revenge on them all.  Alliances are struck, friendships betrayed, and by season’s end, Sunny and M.K.’s lives will be forever altered with devastating consequences.

Also returning are actress Ally Ioannides, actors Aramis Knight and Stephen Lang with newly added Nick Frost. The series is produced by Alfred Gough and Miles Millar and is slated to premiere its ten-episode run beginning March 19 at 10pm EST/9pm Central. Catch the official teasers below!

Don’t forget to purchase Into The Badlands: Season One right now at Amazon.com!