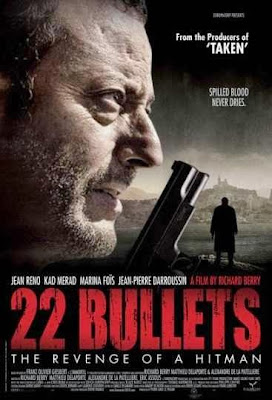 What do you get when you get Luc Besson on board to help produce a Jean Reno action vehicle? Well, of you have not yet seen the magic currently known as the cult-classic hit Leon: The Professional, chances are you will be blown away for what comes next in Besson’s upcoming French action suspense thriller, 22 Bullets.

The film has existed for several years now, hitting cinemas throughout Europe, but today we are finally granted an English-language trailer for the film, which will release in select theaters on November 8, 2013 in North America. 22 Bullets stars Reno along with Kad Merad, Jean-Pierre Darroussin, Marina Fois, and Joey Starr. The French language feature film is based on a novel by Franz-Olivier Giesbert, and adapted for the screen by writer and director Richard Berry.
SYNOPSIS:

Retired gangster Charlie Matteï (Jean Reno) embarks on a violent quest for revenge after being pumped full of bullets by his former associates, and left for dead in this pulpy crime thriller from director Richard Berry. Few men could survive having 22 bullets tear through their flesh, but somehow Charlie has managed to get back on his feet. Upon discovering there is a price on his head Charlie sets out to learn who signed his death warrant as police work to track down his would-be-killers. When all clues lead Charlie back to his childhood friend Tony Zakia, he is forced to consider the prospect that he may have been betrayed by one of his closest allies.

Kevin Tancharoen Retires From MORTAL KOMBAT NINJA: SHADOW OF A TEAR Gets New Cover Art And A Release Date