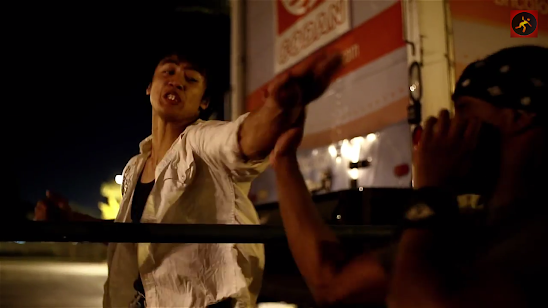 The inspired folks at Lunar Stunts have been around for quite a while now, working on building their repetoire promoting their own brand of martial arts action cinema with a flurry of shorfilms now available on their channel. Notably, their agenda can also be observed in a small series of random test fights titled The Fighting Journey, a project which began last summer.

Accordingly, independent filmmakers Eric and Irvin Nguyen have taken to their platform to promote their newest installation titled The Fighting Journey Episode 5 – East vs West. The project came together about a few weeks ago when fellow online performer, Dragon Spirit Productions’ own Mark Hudson flew out California from Atlanta, Georgia and ultimately found himself in throes of the indie action circuit out West where he would eventually meet up with the Nguyens prior to filming.
The project is also their first collaboration together, much to Hudson‘s approval who is looking forward to doing it all again sometime next year while helping put Atlanta-based Dragon Spirit Productions on the map. So, needless to say, watch this space.
As a noteworthy mention, Lunar Stunts is heavily underway on delivering their next gig with the upcoming big-scale action comedy shortfilm project, Eat. Pray. Ninja., following its successful Indiegogo push back in April. In the meantime, The Fighting Journey continues with number five in the embed below!

Check Out The Latest B-Roll Footage For THE EXPENDABLES 3 HMCIndie Presents: THE BREAK-UP