THE ROUNDUP: NO WAY OUT Punches In With New Stills From The Upcoming Don Lee Action Threequel 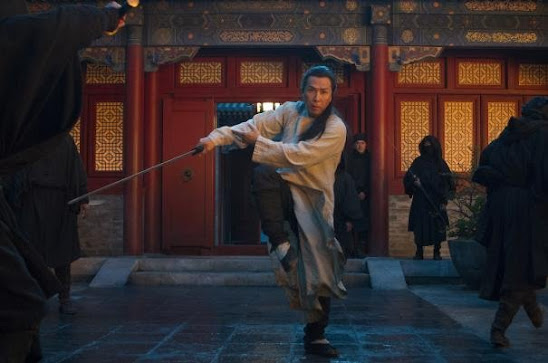 It was supposed to be a “groundbreaking” maneuver for the film distribution industry in light of the latest updates for Yuen Woo-Ping‘s Crouching Tiger, Hidden Dragon: The Green Legend. Now, not quite so much.

Monday evening news broke throughout reporting the latest deal between film’s production company, The Weinstein Company, subscription video-on-demand provider Netflix and theatrical entertainment company IMAX that promised a day-and-date release for the upcoming sequel starring Michelle Yeoh and Donnie Yen. This week however, a handful of theater branches have pulled back from the deal refusing to comply with the release agenda, with at least a total of five major U.S., Canada and Europe-based theater chains backing away, including Regal, Cinemark, Carmike, AMC, Cineplex, Cineworld and Wanda.
In sum, the battle lines have officially been drawn. Whether or not the theater chains were informed about the deal or they were and simply refuse to be a part of it, one thing is clear aside from the film’s August 28, 2015 release date: Unless you live near an aquarium or a museum or are subscribed to Netflix, the chances of seeing this film just got a little bit more difficult.
Personally, I prefer to see movies in their big screen glory, as I love being part of the experience of a movie. Moreover, I say this also because I don’t have Netflix – just putting it out there. So while Netflix may see this as a lucrative deal they can benefit from, chances are that folks like me may have to go a little farther out of my way just to see a film, in which case, if you’re like me, you might be feeling a little alienated. And in all likelihood, no one is going to buy a ticket for a film they can see at home, which kind of makes the theatergoing experience seem moot.
In the end though, this is an investment, and for some reason or another, IMAX feels it can benefit from making Netflix an excluisve partner. As it stands though, that remians to be seen. As for me, well, as hectic as my day-to-day work schedule is, hopefully MoMA will grant me a enough commute time to make it to an 10:30pm showing. And I’m no night owl either. Bummer.
H/T: Variety, The Wrap