Now Available: BARNEY BURMAN’S WILD BOAR Has Got The Bacon 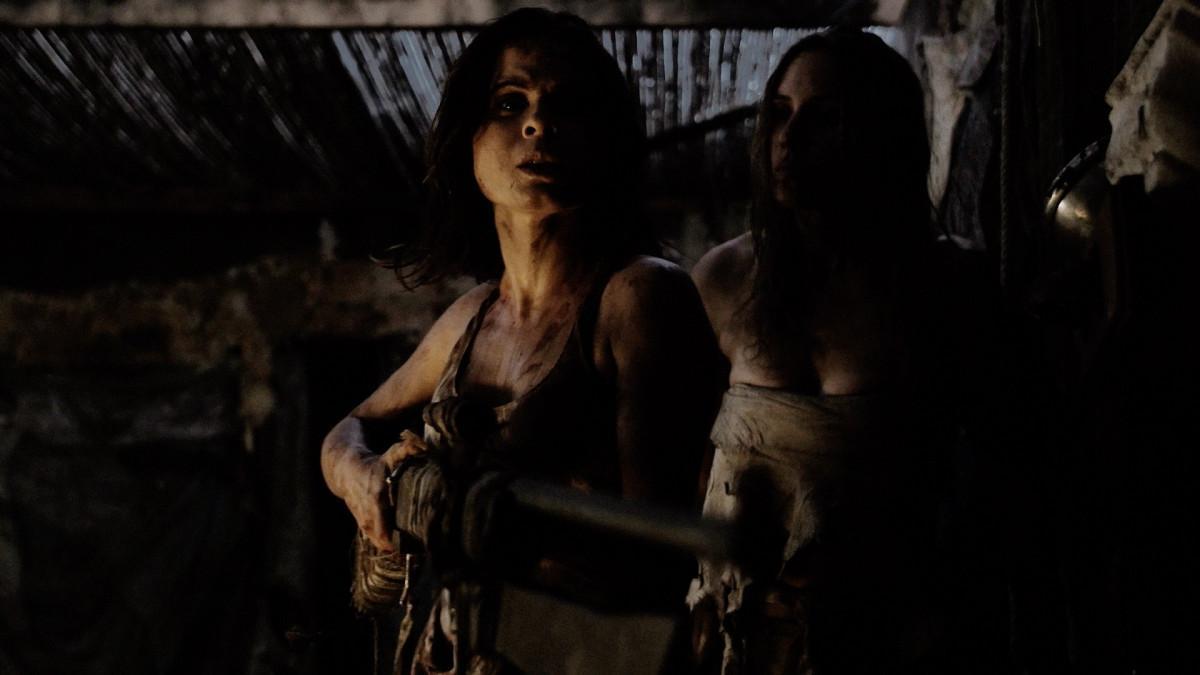 Oscar-winning make-up artist Barney Burman has made his directorial feature debut with Barney Burman’s Wild Boar, a full-length version of his 2019 short based on the same premise. A group of geocaching friends set out to find a treasure belonging to entrepreneur and millionaire geocacher Roger Foster, missing since 2006. Their adventure takes them to a former nuclear test site, and we all know from countless 1950s science fiction films that this never ends well.

The film is bookended by stop-motion animation clips, with the initial scenes showing pigs on the grounds of the nuclear testing site. It doesn’t take a nuclear scientist to figure out what happens from there. Mutated pig people with an appetite for human flesh think they’ve found their next meal with the lost geocachers.

Engaged couple Scarlet Lamb (Augie Duke) and Garret Wolf Reed (Daniel Roebuck), along with Wolf’s brother Turtle (Jim Nieb) and friends Sable (Jessica Sonneborn) and Griffin (Michael Reed), are excited about their upcoming geocaching adventure, one of mythic proportions. Millionaire entrepreneur Foster (played by the director himeself) was said to have disappeared while geocaching in 2006, potentially leaving a fortune out in the desert, waiting to be found. Their venture takes them to a former nuclear testing site, a fact they seem to know, although they drive over any number of signs cautioning them to keep out. Undeterred, the group discovers a hidden tunnel and exits into a pristine canyon — save a bloody white dress on a pike. The friends realize at that point they are not alone.

The pig man begins his hunt, and frankly, the unarmed humans don’t stand a chance. Turtle, Wolf, and Griffin are killed immediately, although the pig man takes all the bodies — dead or injured — back to his lair and his mate. It is there that a surviving Scarlet hears another captive talking to her, giving her advice on how to stay alive: act as their pet, eat what they give you, give them sad eyes. “Let’s see if you can stay off the menu,” the voice adds.

Scarlet enventually escape her captors’s home with the help of Sable, and they stumbe upon an entire subculture of pig people. The encampment is bathed in the same muted tones and seemingly dirty and recycled backdrop of a typical apocalyptic film, but the pig people demonstrate visual art, decoration, and music, giving them an unexpected and fuller depth of character. Although the film belongs to the horror genre, the pig people seem to have no nefarious agenda, save eating, much like humans do when they hunt. It’s a startling reversal to have the pigs becoming consumers of human flesh.

Barney Burman’s Wild Boar moves slowly sometimes, but that is perhaps due to the intentional building of suspense. Although the film follows most of the well-trod paths in the horror genre, there are a handful of details and plot twists that keep the film interesting. The last two remaining protagonists fleeing their pig-person captors are women, and they are certainly no damsels in distress. It was refreshing to see two women draw from a deep well of self-preservation and attempt to save themselves, albeit with varying degrees of success.

Some of the dialogue felt stilted at times, but it wasn’t enough to ruin the film. Being a make up special effects professional, Burman curated a stellar team to create believable pig people, as well as designing horrific injuries and some expected gore in the film. The score and soundtrack were also well-suited to the movie.

Barney Burman’s Wild Boar is a horror film with a moralistic twist. There is always a fine line between predator and prey, and the roles can flip at any time. That is scary, indeed.

Barney Burman’s Wild Boar is now available in the U.S.