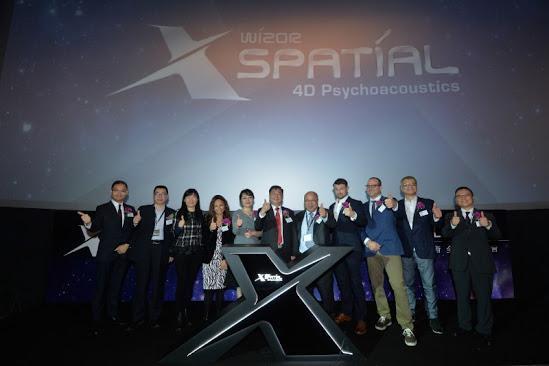 It’s interesting to see how theater technology evolves from time to time, though not everyone shares in that same immersive experience since theaters equipped with that kind of gear are located in select locations around the world, especially Asia, for one. I’m speaking of cinema local where services like Barco Escape and things like 4DX and Screen X are paving the way for moviegoers to engage the cinematic experience even beyond wearing a pair of 3D glasses, only here and now we turn to another new venture unveiled at CineAsia this week in Hong Kong in the form of company X-Spatial’s 4D Psychoacoustics.
The new technology became the platform on Wednesday evening for director Liam O’Donnell whose latest contribution, Beyond Skyline, which unveiled a preview sampling with the new technology. The company outlined the details of that conference which includes its latest deal with Zhuijang Film, Faan Cultural and Beijing Forbidden City Film Company Limited in a press release the same day which you can view below while it’s pretty safe to say this one’s not coming until 2017. That said and considering the company’s credentials and a cast that includes Frank Grillo and Bojana Novakovic, and the likes of Indonesian martial arts film stars Iko Uwais and Yayan Ruhian taking on aliens in hand-to-hand combat, this one might be worth the trip to a theater with X-Spatial equipment if there’s one in your area. Otherwise, I guess we’re stuck with good old-fashioned 2D or 3D/IMAX. Ha!

HONG KONG, Dec. 7, 2016 /PRNewswire/ — X-Spatial Media Technology Limited ( “X-Spatial” or “the Company”) held the grand launch of “X-Spatial 4D Psychoacoustics” technology and movie preview of “Beyond Skyline” at UA Cine Times, Times Square, Causeway Bay, Hong Kong today (7 December 2016), indicating that such epoch-making audio optimization technology is officially available with the highest regard from the Hollywood. Being the first movie utilizing “X-Spatial 4D Psychoacoustics” technology in post audio production, “Beyond Skyline” is the sequel of Hollywood-based science fiction movie “Skyline” produced by Hydraulx Visual Effects, which is the same visual effect team of “Avatar” and “2012”, the utilization of “X-Spatial 4D Psychoacoustics” enriches the magnificent story and makes it even more perfect and complete. During the grand launch event, X-Spatial also signed the cooperative agreements with Zhuijang Film & Media Corporation Limited (“Zhuijang Film”), the leading cinema group in China, and FeeFaan Cultural Industry Group Limited (“FeeFaan Cultural”), the leading video production and marketing corporation, as well as Beijing Forbidden City Film Company Limited (“Beijing Forbidden City”) to promote the installation of “X Spatial 4D Psychoacoustics” in their cinemas chains and franchises in Southern China and Northern China, so as to expand the coverage of cinemas in the Mainland and comprehensively advance into market of the Greater China. The grand launch attracted more than 300 guests to experience the revolutionary auditory feast personally, including leaders of movie-making industry in Hollywood and the Greater China like Mr. Liam O ‘Donnell, Director of Beyond Skyline; Ms. Maguy Cohen, Hollywood Film Producer; Mr. Matthew Chausse, Producer of Beyond Skyline and President of Mirabelle Pictures; Mr. Phillip Chausse, Executive Producer of Mirabelle Pictures; as well as representatives from cinemas, movie producers, movie issuers and investment sector, so that the place is bustling with joy and excitement.

X-Spatial Management and Honorable guests attended X-Spatial Technology Grand Launch today and the lighting ceremony. “X-Spatial 4D Psychoacoustics” is a revolutionary audio enhancement technology with Wizor technology as its foundation. It generates the best quality of acoustic experience for audience by breaking through the traditional restriction of turning sound into digital data and remedying the shortcomings of audio distortion. The traditional audio system of cinema mainly depends on the configuration of physical location of the speakers to imitate a three-dimensional surround sound field.

Since the space between speakers is not seamlessly filled up, it is unable to realize an ideal 360-degree spherical full spectrum surround sound effect, leading to restriction of the “sweet spot”. However, the emergence of “X-Spatial 4D Psychoacoustics” solves such problem of the existing technology, allowing audiences to obtain 360-degree superlative audio-visual enjoyment like sitting at the “sweet spot” regardless of their location.“X-Spatial 4D Psychoacoustics” revolutionary audio performance is mainly carried by three layers of technology, namely Signal Recovery, Psychoacoustics and Augmented Reality (AR). Signal Recovery can be traced back to the field of aerospace science and technology. X-Spatial established a proprietary media transmission database and accurate distortion mathematical formula through numerous research and experiments, filling up missing details of the sound in the course of transmission by recovering three-dimensional sound field from distorted two-dimensional sound source through reverse computations. On the other hand, X-Spatial realizes that sound from different directions have to change the angle when entering the eardrum, while the pattern and shape of the acoustic waves will also be altered accordingly. The brain identifies the direction and location of the sound source exactly through the analysis of these sound waves with different shapes. Therefore, X-Spatial takes advantage of the psychoacoustics to utilize sound waves with various shapes as the carrier of the sound source into the eardrum, forming a three-dimensional sound field and “tricking” the brain to make an interpretation that the audience is hearing a seamless three-dimensional sound field. For Augmented Reality, X-Spatial “excites” certain parts of the human brain which are particularly sensitive to sound through Music Sensitivity and & Perception Enhancement (MSPE) effect, so that listeners can better capture the exquisite emotional expression of the music to have a greater enjoyment of the music.

The application of “X-Spatial 4D Psychoacoustics” is extensive, not only for audio and video contents, but also for hardware devices. For audio and video content, “X-Spatial 4D Psychoacoustics” can be used in original sound recording and sound mixing system in production of movies, TV series, music video and internet video, enhancing the sense of space and level of the sound quality. For hardware devices, “X-Spatial 4D Psychoacoustics” is not only applicable to professional hardware equipment like audio system of cinema, concert halls and conference halls, KTV audio systems, radio front-end systems and Internet TV front-end systems and so on, but also directly applicable to consumer electronics. Besides, X-Spatial is also preparing to launch the Bluetooth speakers, portable audio system processors, headphones and speakers under its own brand, so that the public can enjoy the vibrating ultra-realistic acoustic sound at any time.

The distribution of cinemas and content production are the important areas of future development for X-Spatial. Being a playback plug-in, “X-Spatial 4D Psychoacoustics” does not alter cinema audio system including Dolby, IMAX, Auro and DTS: X, which means it is compatible with existing audio deployment to optimize the overall sound performance, leading to even more meticulous details and clearer sense of level, as well as highlighting the sense of three-dimension and enhancing the performance of medium-high frequency. The signing of cooperation agreement with Zhuijang Film, FeeFaan Cultural and Beijing Forbidden City is a milestone for the Company to strategically enter the cinema market in the Mainland. The China Film South Cinema Circuit under the Zhuijang Film is one of the top cinema chains, and even the leading cinema chains in Guangdong. As of November 2016, it had 515 cinemas, 2,802 screens, with yearly box office of RMB 2.976 billion in 2015, and stably stayed in the list of leading cinema chains in China. Meanwhile, Beijing Forbidden City is a large professional movie and television production company engaging both in planning, production and marketing, with a total of more than 30 movies and more than a thousand sets of TV series. Its television series won several national awards including Huabiao Awards, the Best Works Awards, Golden Rooster Awards, Hundred Flowers Awards and Golden Eagle Award, while its movies also won various international film awards in Cairo, Moscow and Tokyo. The powerful strength and background of its partners will help “X-Spatial 4D Psychoacoustics” to expand its market in the Greater China, achieving continuous expansion of the coverage network.

“Today, the global grand launch of “X-Spatial 4D Psychoacoustics” has an iconic meaning! Looking ahead, we will work on cinema distribution and movie content production as the drive to deepen strategic alliance and speed up industry distribution, promoting the implementation of collaboration of cinema and movie production, so that more people will know and enjoy the revolutionary acoustic experience of “X-Spatial 4D Psychoacoustics”. At the same time, we will take consumer electronics as an opportunity to enter the retail industry, promoting offline sales through online business, so that the public can bring home the sound effects of the cinema. We believe that “X-Spatial 4D Psychoacoustics” will disclose the charm of original sound to the world through its breakthrough performance, and become the new industrial standard of the global audio industry!” concluded Mr. Clarence Wong, Director and General Manager of X-Spatial.