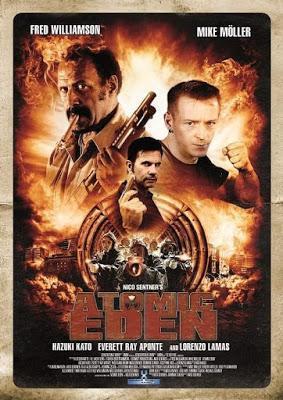 Director Nico Sentner‘s efforts in film are well embedded with credits of up to at least ten years of work on both sides of the camera, so his skillset is pretty workable to that effect. However, that doesn’t bode too highly when measuring the shortcomings of an independent production, and so while some titles deserve a curve, it’s a curve to be used with a grain of salt judging by one’s own taste.

For this, we get a look at Sentner’s feature debut, Atomic Eden, which mainly rests its laurels of the glory of B-movie action fandom. Actor Fred Williamson leads the film with a story focused on a ragtag team of mercenaries and soldiers who convene at an abandoned Chernobyl mining complex under the orders of their old friend and team leader, Stoker, played by Williamson. Once there, not all the details of the mission are made clear and it isn’t long before our heroes are surrounded by a nameless and faceless enemy and his army of masked, white jump-suited gunmen. Swarms of attacks keep them cornered in a single building while waiting to advance the mission to a secret underground tunnel to finally recover a secret weapon in a hidden bunker constructed during NAZI Germany, but time is running out, the fight for survival is far from over.
If you think you’ve heard this plot before, then you’re probably right. The film is pretty obvious in its nod to direct-to-video military action thrillers led by a cookie-cutter cast, coupled with cheezy one-liners and bad acting and enough explosions and gun fights to help keep things serviceable. Williamson is the tip of the spear here as our grisled, cigar smoking team leader with a roster of characters, many of whom come right out of a comic book; Wolfgang Riehm cites the Bible every now and then as a badass priest named Heinrich while actress Kato Hazuki and martial arts action star Mike Möller couple together as Reiko, “The Samurai” and David, “The Fighter”. Actress Josephine Hies and actor Dominick Starck who also serves as one of the producers play two of the most awkward and miscast of all the characters – Laurie, “The Rookie” and Brenner, “The Blade”, and Everett Ray Aponte chews it up as Darwin, “The Texan”, drinking moonshine between scenes and refusing his own label as a Cowboy despite being one. Weird.
Even Sentner gets in on the action for a little while as John, “The Sniper”, lending what little is required of him to the short screentime he gets in this low-budget fare of action. The plot has its share of holes and languishes throughout with meandering character and story development whilst relying largely on hefty gun battles and explosions to help keep the viewer awake, though the only real and notable moments for action are some of the fight sequences that feature Möller doing what he does best on screen next to Kato gets the job done in her own scenes as well, though the label, “Samurai”, offers nothing short of a needless stereotype, references to Sun Tzu notwithstanding.
Beyond the aforementioned stereotypes and despite some of the good action scenes that take place, much of the script is weak and otherwise poorly acted and phoned-in. Aponte does his best to make his character work as one of the few, slightly more watchable characters in the film next to that of Riehm and Möller, and a cameo finale by Lorenzo Lamas while Williamson, whose yesteryear acclaim as a Blaxploitation star substantiates his current niche popularity, offers nothing short of a character that looks more interested in smoking a cigar than delivering dialogue.
There’s at least one scene that goes unnecessarily into overkill before the film even enters its second act, but this speaks largely to the bad script. This and all else mentioned, along with a lingering story, under and non-developed characters and a bodycount limitless to the point of comedy qualifies Atomic Eden, by name, for its own demise, save for Möller who, regarding his sheer talents in fight choreography and martial arts, shines on his own.
It’s not enough to be a fan of action movies to enjoy Atomic Eden, unless you’re a fan of Williamson and love the potential Möller brings to the table in fight choreography. That said, there have been better feature debuts by filmmakers and it’s a shame that for Sentner, this particular movie wasn’t it. I believe he can do better, and to that extent, I certainly hope he does.

Sakaguchi Tak Is Faster Than A Speeding Bullet In The First Teaser For RE:BORN The DC Trinity Emerges In New Character Posters For BATMAN V SUPERMAN: DAWN OF JUSTICE