Lee B. Golden III News david cheung, filmcombatsyndicate.com, i am not the devil, samuel smith 0

Director Samuel Smith only has two shortfilms to his credit. Both have been making the festival rounds including the new supernatual thriller, I Am Not The Devil, which I think wins with its title and artwork alone while presenting a feasible concept in shortform that provides a stable medium for action, drama and mild fantasy.
Featured is actor and martial artist David Cheung, currently a busy man with work to be done on his in-production spy comedy, The Real Target, debuting at the helm with lead actress and filmmaker Yolanda Lynes. Here, Cheung plays a thief raiding an underground auction where a woman, seemingly corrupted by Satan, is held captive and contained by two devil whisperers.
Smith and his crew shot this particular project in a period just shy of 24 hours, not always a preferred time frame but provenly doable for a director who knows how to shoot and package shots together solidly and with tact. The action, small in scale, stimulates enough for the martial arts crowd as it looks to Cheung to carry the stylishly-edited fight action opposite the film’s fight team as well as action principles Nino Noology and Adrian Bronin.
Linda Louise Duan compels as the woman held captive, amply presenting a stronger acting presence for a role that boils much more down to implied context than what little dialogue there is. For a seven minute venture, it’s a smart move as most of the short leans on its visual attributes and spectacle in its short-form execution of a story that could offer plentily if given a budget for a more grand, possible 90-minute showing. 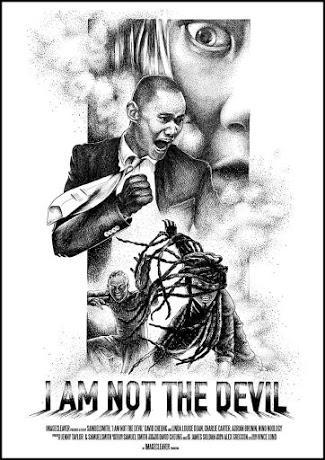 Smith himself also lensed the action, and not for nothing as he exhibits gumption and gravitas when it comes to shooting fight choreography and stunts. A few of the shots might be cripplingly tight, but he makes up for it in the wider shots and longer takes where and when required.
I Am Not The Devil is just the kind of project that should deservedly get Smith in the door for more filmmaking prospects with the right people. Balancing a feasible story structure with exceptional fight action and photographic performance are not easy feats to achieve in the minimal production, and so it takes a good and knowledgeable director to make it work. With seven minutes, Smith staunchly exemplifes this in at least half that time.
Smith’s next stop after this will be the Iron Dragon TV Action Fest in August with the 2016 award-winning fantasy actioner, Tengu: Birdmen Of The Mountains, also starring Cheung. Keep an eye on him. He’s on the move and he’s got promise.