Taika Waititi Is In Talks To Direct THOR: RAGNAROK 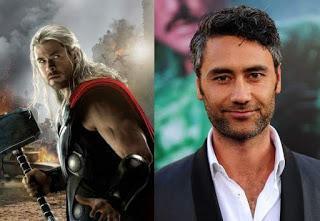 November 3, 2017 is the day the Marvel Cinematic Universe finally meets “the end of all things” for the forthcoming production of Thor: Ragnarok. The MCU has been consistently stirring excitement among fans who have been following the movies and Netflix shows with Marvel’s own Kevin Feige stepping in and out to lend his fruitful opinions about what lies ahead on both ends.
For now though, we still have a couple of trilogies to finish with Captain America: Civil War looming for next year in May along with Thor: Ragnarok with Chris Hemsworth returning to star, no less. As slow as things have been to develop though, we finally have a director in talks with Green Lantern (2011) co-star and What We Do In The Shadows helmer, director Taika Waititi in the chair, ultimately beating out Reuben Fleischer.
Jaimie Alexander, fresh off to a successful start as a kickass lead in the NBC series, Blindspot, is reprising her role as Lady Sif along with Tom Hiddleston as the franchise villain favorite, Loki, according to The Wrap.
Details ahead. All hands on deck!