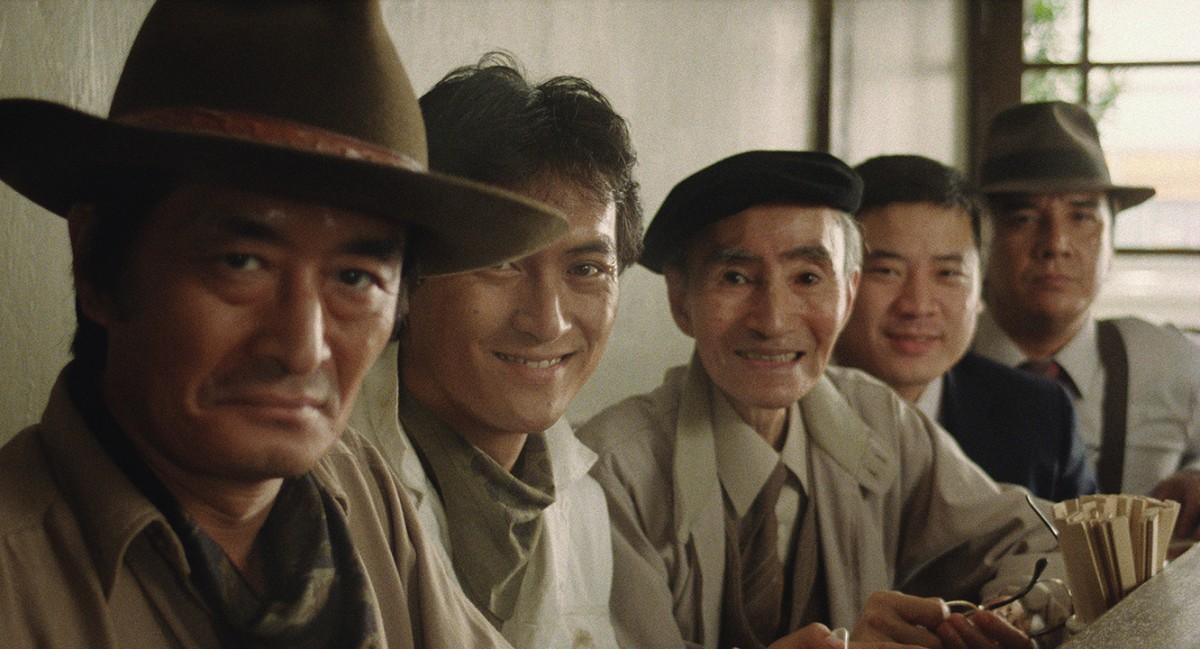 Ever see a couple engage in some extra-level food fetish where methods of kissing resort to playing oral ping-pong with an egg yolk?

Juzo Itami’s 1985 sophmore feature, Tampopo, certainly doesn’t beat around the bush with its kinetic wall-to-wall energy and flourish. The film frequently traverses through a myriad of characters and side stories, interludes on which the film heartily foundates, touching on exploits that are dramatic and harrowing, romantic, tragic and even sexual.

Koji Yakusho’s enigmatic performance as an unnamed gangster-type in a white suit exudes enough simplicity to welcome into the narrative as he recurs throughout the film. He’s a man of fine taste in moviegoing, atmosphere, food and etiqutte, and lavishes in culinary fetishes with his mistress, played by actress Fukumi Kuroda.

Following their entrance, Tampopo formally introduces trucking duo Goro (Tsutomu Yamazaki) and Gun (Ken Watanabe) who stop at a low key ramen shop to have a meal. After butting heads with a disagreeable patron named Pikusen (Rikiya Yasuoka), a fight ensues and by morning, Goro awakens in the care of the diner’s owner, Tampopo (Nobuko Miyamoto).

The trio manage to break the ice over a constructive critique of her ramen before they head off. In a flash, she runs after Goro to parlay in hopes of being taken under his wing and leveling up her establishment in her long-departed husband’s wake, and the two soon begin their journey as student and teacher, with Goro training her in everything from ingredients, method, timing and stamina, to even diner-hopping and learning from other chefs.

There’s progress for sure, but the effort will take a lot more than what they’ve managed thusfar, and eventually enlist the help of a noodle sensei (Yoshi Kato) known to Goro, and Shohei (Kinzo Sakura), an old rich man’s personal limo driver proffered to Tampopo for her aid in an earlier scene. In a surprising and delightful twist, Goro later successfully snags another willing participant to help Tampopo revamp her diner.

It’s a small matter of time before Tampopo gets to the heart of our hearty story of friendship and love, and the influential part that food plays. It exudes an air of sadness on par with its picaresque exuberance, and more importantly, just as a pair of ramen diner patrons do in an earlier scene where an old man teaches his latest young acquaintant his own take on how to endulge ramen, Tampopo doesn’t rush the process.

The rest of the film is simply a layered adventure of emotions deep in scope. Between a restaurant full of elderly businessmen with a younger cohort, an etiquette tutor and her female troupe, an old man with a toothache, a con-artist working his latest con, an old woman lurking at a supermarket, and a man rushing home to his wife’s deathbed, Itami’s Tampopo immerses viewers into a world of whimsical delight in which you never stay in one place or tone.

Each tangential vignette lends something poignant and poetic, like tossing colors on canvass with strokes that delve into their own identity. It’s purposefully bewildering and yet still unencroaching, as the film delivers on consistency in its performances and character development.

Itami, before his untimely death in 1997, had an extensive acting career in the last century before taking the mantle as a filmmaker with his 1984 debut, The Funeral. That he was able to rejoin some of his cast for his second endeavor in Tampopo is as heartwarming as it is rewarding to the average moviegoer with an eye for genre cinema.

Iconoclasts like van Gogh and Picasso did their thing. Contemporary legends like Bob Ross did his. Whatever your style or take is here, Itami was, and remains no exception.