THE ASSASSIN Cuts Close In The New Trailer For Its U.S. Release! 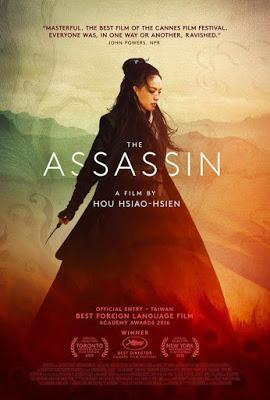 A Best Director award and accolades from New York and Toronto aside, Well Go USA has finally launched a new trailer for acclaimed Taiwanese filmmaker Hou Hsiao-Hsien‘s latest martial arts epic drama, The Assassin, and the footage obviously speaks for itself. It’s actress Shu Qi leading the way based on an ancient short story compilation along with actor Chang Chen and action design by Stephen Tung Wai, marking seven years of on-again-off-again production with reshoots and other hurdles, as tedious and tasking as it might have been. You can honestly posit this as a labor of sheer love and passion from a worthy director, and now moviegoers beyond the festival reach will finally be able to see it when it releases on October 16.
SYNOPSIS:

Back with his first film in 8 years, legendary Taiwanese director Hou Hsiao-hsien wowed this year’s Cannes Film Festival (where he won Best Director) with his awe-inspiring THE ASSASSIN – a wondrous take on the traditional wuxia film. The story is simple, if elusive – in 9th-century China, Nie Yinniang is a young woman who was abducted in childhood from a decorated general and raised by a nun who trained her in the martial arts. After 13 years of exile, she is returned to the land of her birth as an exceptional assassin, with orders to kill her betrothed husband-to-be. She must confront her parents, her memories, and her long-repressed feelings in a choice to sacrifice the man she loves or break forever with the sacred way of the righteous assassins. Rich with shimmering, breathing texture and punctuated by brief but unforgettable bursts of action, THE ASSASSIN is a martial arts film like none made before it.