The Final Trailer For YAKUZA APOCALYPSE Is A Montage Of Violent Anarchy! 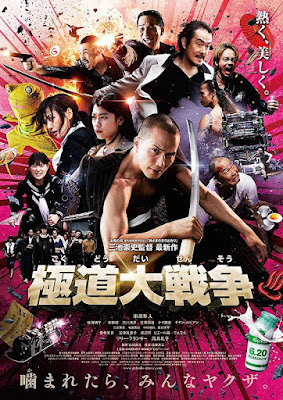 There’s no doubt that director Miike Takashi‘s latest action horror endeavor, Yakuza Apocalypse, revives the usual eccentricities his fanbase has gotten so used to in his career. The reviews off of its Cannes premiere come mixed for a film that encompasses what The Guardian‘s own Andrew Pulver concluded in his review as “A very acquired taste.”, and that isn’t exactly a secret for folks familiar with movies like manga adaptation, Ichi The Killer and Izo.

Nonetheless, the latest trailer is circling the internet with one last push to get your attention; Suffice it to say this one is a frenetic orchestra of kicks to the face, stabbing, screaming, biting and bloodsucking, and crescendos galore with Indonesian action star import, Yayan Ruhian, and lead actor Ichihara Hayato front and center for the film’s June 20 release in Japan. And for an acquired taste, I think it’s safe to say the dinner table is full and bellies are hungry. Alas, check out the trailer below the synopsis and embrace your bloodlust!

In the ruthless underground world of the yakuza, no one is more legendary than boss Kamiura. Rumored to be invincible, the truth is he is a vampire—a bloodsucking yakuza vampire boss! Among Kamiura’s gang is Kageyama, his most loyal underling. However, the others in the gang view Kageyama with disdain and ridicule him for his inability to get tattooed due to sensitive skin. One day, assassins aware of boss Kamiura’s secret arrive from abroad and deliver him an ultimatum: Return to the international syndicate he left years ago, or die. Kamiura refuses and, during a fierce battle with anime-otaku martial-arts expert Kyoken [THE RAID: REDEMPTION’s Yayan Ruhian], is torn limb from limb.

With his dying breath, Kamiura bites Kageyama, passing on his vampire powers to the unsuspecting yakuza. As he begins to awaken to his newfound abilities, Kageyama’s desire to avenge the murder of boss Kamiura sets him on a course for a violent confrontation with Kaeru-kun, the foreign syndicate’s mysterious and seemingly unstoppable leader!

Envizion Films Kickstarts Feature Funding For THE WAY: FIGHTER'S TWITCH Joshua Tieu Takes Out The Yakuza In A New Clip For THE CHALLENGE LETTER!