‘THE SEDUCTION OF SADISM, BEAUTY IN BLOODSHED: Retrospective of Dario Argento’s DEEP RED’ 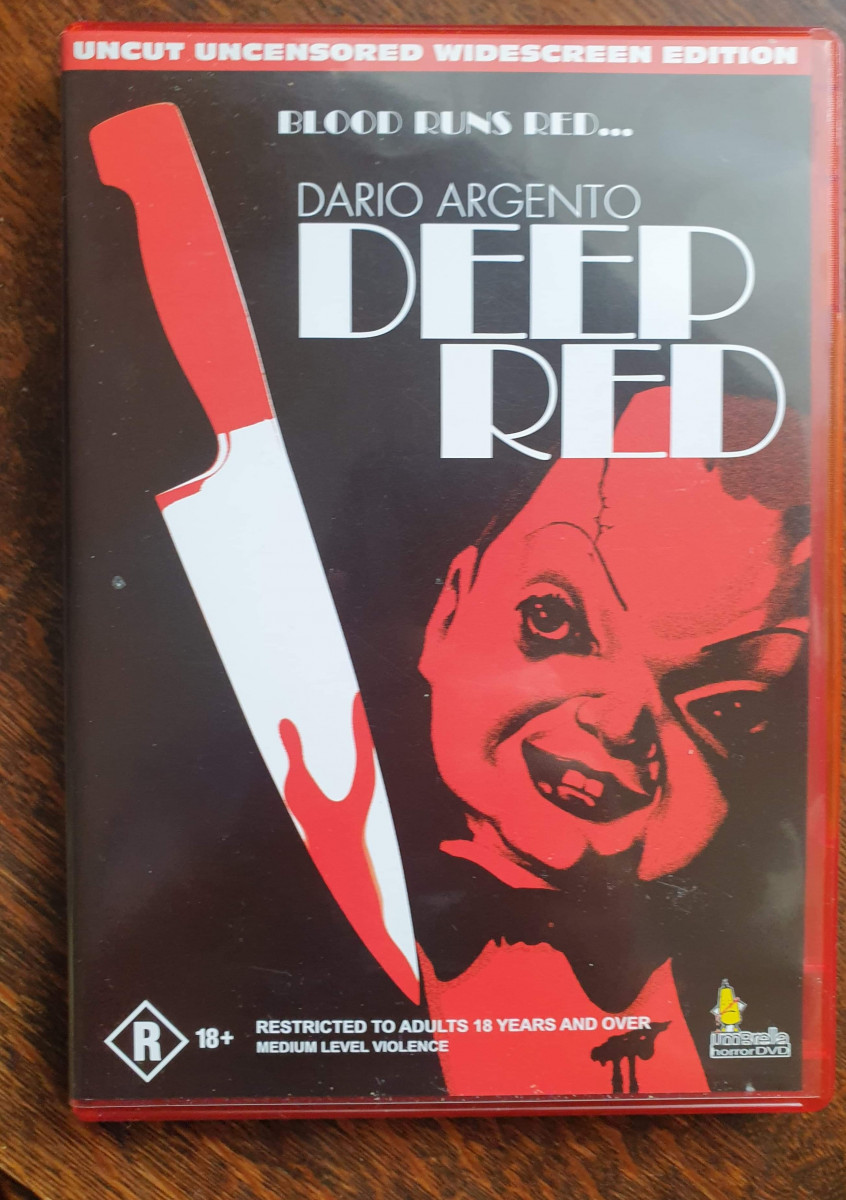 In recent years the horror genre has expanded beyond the confines of its original formulaic construct. There are so many well established tropes now, ranging from the very common found footage style (with too many examples to now cite) to the more satirical genre bending narrative of something like ‘THE CABIN IN THE WOODS’ or even ‘THE HOUSE THAT JACK BUILT’ – the latter of which is a more recent offering that eluded many cinema pundits.

Evidently, a good horror film seeks to subvert clear expectations to shock and surprise the audience. Whilst truly exceptional horror succeeds in getting-under-your-skin – provoking that unsettled and lasting fear. Though in recent years countries like the United Kingdom and Japan have managed to achieve the latter, the case could be made for the Italians having achieved this as far back as the mid-late 70s and early 80s.

In this writer’s opinion, Italian horror is somewhat underrated amongst its contemporaries especially within the mainstream. Arguably Italy, is the first country to try its hand at addressing Lovecraftian cosmic horror, and it is a nation that oozes creativity and style in everything that it does. In an era where mainstream audiences were fawning over the great works of Wes Craven or Tobe Hooper, Italy boasted talents such as Mario Bava, Lucio Fulci and of course, Dario Argento. Dario Argento’s DEEP RED (or Profondo Rosso) is a masterclass in horror, yet creates a very simple set up where a famed psychic is brutally murdered at a parapsychology conference.

This terrible act draws in the interest of a pianist named Marcus Daly (played by British actor David Hemmings) who inexplicably decides to investigate the murder himself. The more that Marcus flirts with the violence, the more brutality and gore occurs around him and like any true hero, he remains undeterred. Hemmings’ Marcus Daly is a somewhat likeable protagonist who gives an understated performance, the subtle cues in his reactions show a calm yet bizarrely willing participant dedicating to solving this riddle. His skills as a pianist may be far from perfect, however it’s his desire to seek resolution that makes him a seemingly flawless hero. Although there are a range of characters littered within the narrative, they serve more as secondary elements as Marcus interacts more meaningfully with his investigation, than he does forming relationships. There is no legitimate romantic subplot for the protagonist, with his own satisfaction satiated by the clues he finds and the mysteries he solves.

In DEEP RED, the way Argento frames each shot in a tighter manner, serves a somewhat two-fold purpose. Restricting the view literally suffocates the audience expectations by isolating visibility, thereby further saturating us with a meaningful sense of terror. As Argento employs these frames, he demonstrates his brilliant understanding of tension, as the protagonist engages in a lethal game of cat-and-mouse we begin to feel that greater sense of suffocating dread well before Marcus does – and we fear for him. His curiosity draws him into a web of intrigue as much as abject horror, as a killer with a penchant for a hatchet, raises the body count around the workings of this amateur sleuth. All of these elements manages to stir within your consciousness, there is a gloominess in the setting despite Argento’s garish choice of colour palate and use of disorienting angles; a deliberate means of prompting sheer insanity within the viewer, yet seducing us with his indulgent and visceral manner. The characterizations in this film are equally potent once you recognize that the protagonist is more perhaps more curious than heroic, whilst the antagonist is largely stylish in their sadism.

Indeed, Argento’s frequent collaboration with the band Goblin, is a stroke of genius with the Italian progressive rock outfit composing a very disturbing yet thrilling score to match Argento’s striking visuals. Couple this with Argento’s clear choice of isolated yet intricate set pieces, and we as the viewer experience an assault on our senses that doesn’t subside until we see the end credits roll. Within the narrative, there is a not so-subtle commentary on the effects of trauma, this serving as an effective means of eschewing any overt exposition in the story. Though Argento achieves this in such a way, that still manages to mask the identity of the killer up until the conclusion of the film. As Argento weaves a gorgeous tapestry of colour and sound, he realizes that the elusiveness and mystery cannot be completely ignored, in favour of violence. After all, Marcus’ investigation fosters our intrigue and his curiosity is the ember that quickly burns into an inferno of brutality, as the killer closes in. Punctuated with even more creative genius, Argento’s use of creepy dolls in much of the promotional material do serve as a ‘MacGuffin’ of sorts.

You’d be forgiven for thinking that a malevolent marionette with a disturbing expression is the source of homicide, yet it’s an incorrect assumption you’ll easily make. Indeed, as far back as the 70s the artistic flair of Dario Argento managed to subvert the preconceived ideals of his audience – DEEP RED is his masterful ability to twist as well as to captivate. Whilst found footage films will feature a doomed protagonist that the audience is forced to accept, the structure of a ‘Giallo’ film like DEEP RED is characterized by an unlikely participant, an outsider who gradually draws the appreciation of the audience. Within the taxonomy of DEEP RED, Marcus Daly ultimately represents the audience’s own fascination with sheer violence; and the extent to which he proactively investigates, is comparable to the way in which we, as the audience, gleefully observes.

For the uninitiated, ‘Giallo’ is an Italian genre which is yet another form of mystery or thriller, but with that stylish Italian vernacular. In fact, in Italian the term translates to ‘yellow’ which is the colour of those cheap pulp detective novels that were in vogue, in a bygone era.

Given that DEEP RED is over 40 years old, it would be too simplistic to call it dated and then quickly disregard it. In doing so you’d deprive yourself of a cinematic experience that effortlessly illustrates, a more nuanced method of instilling fear and dread. It is one of my favourite movies, and my recommendation to FCS readers, this Halloween or any time of year for that matter.