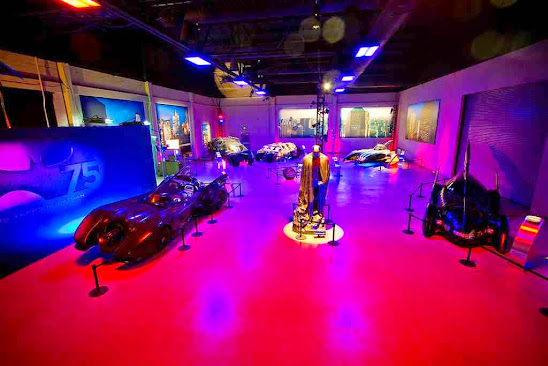 However, today’s updates have nothing to do with the those, especially much to the chagrin of eager filmgoers. However, anyone living in or around the Burbank area could find themselves at the forefront of something truly…well…Batsy! But it’s all good!
Check out all the details below:

(June 10, 2014 – Burbank, CA) – In celebration of the 75th anniversary of DC Comics’ iconic Super Hero, Warner Bros. VIP Studio Tour will open its new attraction, “The Batman Exhibit,” beginning June 26. Warner Bros. VIP Studio Tour worked closely with DC Entertainment to create “The Batman Exhibit” and it will be a featured addition on the studio’s historic backlot for a limited time.

“We have the most exciting props, costumes and vehicles from all seven Batman films on display for visitors to see,” says Danny Kahn, Executive Director, Warner Bros. VIP Studio Tour. “During this unique opportunity, our studio tour guides will also reveal behind-the-scenes secrets from the seven films and the ‘classic’ Batman TV series, highlighting several scenes that were actually filmed on the Burbank lot.”

Visitors will be able to get up close and personal with the original suits worn by Michael Keaton, Val Kilmer, George Clooney and Christian Bale in their respective portrayals of Batman, making it the first time that artifacts from all seven films have ever been exhibited together.

In addition, the exhibit will feature costumes worn by prominent supporting characters and villains, including Robin, The Joker, Two-Face, Catwoman, the Penguin, the Riddler, Mr. Freeze, Batgirl and Alfred. Also on display will be a wide range of props, including Batarangs, Joker cards, Two-Face coins, one of the Penguin’s umbrellas and Bane’s bomb.

In the studio’s Picture Car Vault, several of the Caped Crusader’s most famous vehicles, including the Batpod, Tumbler and Batmobile, will be exhibited as they were in his lair. Visitors will have the opportunity to activate the Bat-Signal and pose at a Batman-themed interactive green screen photo opportunity.

First appearing in the comic book “Detective #27,” which hit newsstands on March 30, 1939, featuring artwork by Bob Kane and a script by Bill Finger, Batman emerged from the shadows to become the world’s most popular Super Hero and dominate all media. In feature films, TV shows, radio, video games, publishing and merchandise, this most human of Super Heroes has battled some of fiction’s greatest villains using his intellect, cunning and an arsenal of gadgets to further his quest for justice.

For more information on The Batman Exhibit and to purchase your tickets, please visit the official website.
Stay tuned for more info!.