WARRIORESS Set To Grace The ACTION ON FILM Fest This August! 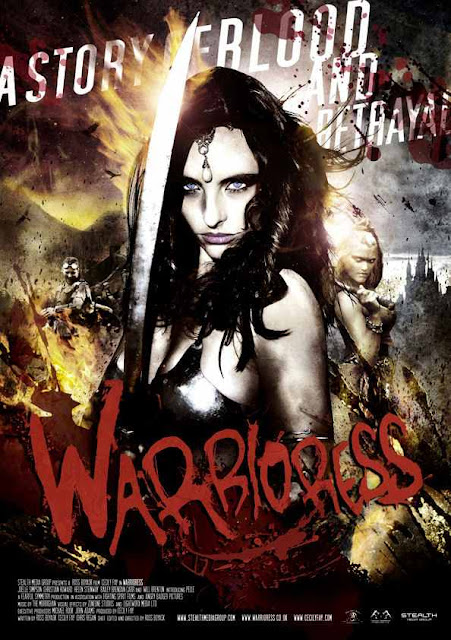 Two powerful female warriors must journey across a post-apocalyptic land to fight a ritual duel, and fulfill an ancient prophecy.In the tradition of “Xena, Warrior Princess”, and influenced by seminal fantasy films such as “Excalibur” and “Flesh & Blood”, Warrioress combines a unique, mystically-infused atmosphere with blistering action scenes. The story features a wide array of vibrantly attractive and powerful female characters pitted against each other in mortal combat.

In this world of mysticism and philosophy, ruled by dominant highly trained female warriors, the world is held in the grasp of the dark and malevolent Falonex Empire, and two distinctly different villages hold a deeply-held sworn belief in a powerful prophecy that will bring them salvation.Once in every generation one chosen fighter from each village must travel on a quest across treacherous terrain to a sacred circle formed of ancient stones, to fight a ritual sword duel, each armed with a sacred sword. If the two warriors are of equal skill and wield the sister swords “the Opener” and “Dragon Singer” they will fullfil the Prophecy and lead the fight against the Falonex Empire. The time has come again for the prophecy to be fulfilled and the two fighters will meet at the pre-destined place. But will they meet as friend or foe?

The ACTION ON FILM FESTIVAL is an international annual event that features a variety of action films, including films of other genres. It also includes charity drives, celebratory dinners, screenings and award ceremonies gathering many filmmakers who submit their work for recognition, with actors who have shared in the accolades such as John Saxon (Enter The Dragon), Talia Shire (Rocky 1-5) and the late great David Carradine (Lone Wolf McQuade). This year, one of the films slated to premiere at the AOF Fest in its ten day schedule is a film by Ross Boyask, Warrioress. 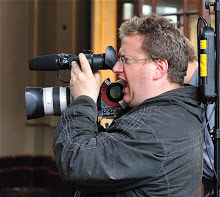 Ross’s love for film dates all the way back to early childhood, having grown up on a staple diet of action movies, namely Revenge Of The Ninja, Commando and American Ninja-three of which he says instantly changed his life. Other film influences for Ross also included anywhere from such beloved classic action titles as First Blood Part 2, the martial arts cult classic from director Steve Wang, Drive, the Cynthia Rothrock classic actioner, China O’Brien, Avenging Force with Michael Dudikoff, The Challenger with actor Scott Glenn, and plenty more titles where the list continues further. Since then he has risen to the occasion, and at the age of 38, he is now a versatile and rising full-fledged filmmaker, inspired by In light of the recent news about Warrioress, I got to share a brief dialogue exchage about his career, and the film. Ross explained further about how he got into the field:

When I was 18, I studied Media Studies as an A Level qualification and loved it. Part of the course was to use the equipment, so myself and my friend Phil Hobden (who later became my producer on Left For Dead and Ten Dead Men) would spend nearly all our free time making films. That was the start, I carried on through university and then on from there.

When Ross was younger, martial arts cinema solidified his love for action. Nowadays, he has a more expanded view about films with a deeper appreciation for classic films, good or bad. Martial arts cinema, however, is ultimately what helpes mold him into the filmmaker he continues to become. Ross explains:

Martial arts cinema totally inspired my career. Before watching those three amazing films I wanted nothing more than to be a comic book artist for Marvel or DC. Watching great martial arts/action films has also made me very aware of how poor the action scenes are in most films, especially films in the last 15 years or so. It’s down to utter laziness I think. Shakycam, impossible to follow close-up camera-work, editing that renders action sequences incomprehensible, and an over-reliance on flashy editing and great sound effects are just excuses for film-makers not creating thrilling action sequences. And audiences (who have no idea what they’re watching) THINK they’ve seen an amazing fight. Most people have no idea that the fights in say Taken are better than the fights in (nearly every other action film), they think they are the same. And they are NOT.

I took the opportunity here to expand a little more about some of Ross’s personal opinions about action films. I follow him on twitter and he happens to be one of the funniest people with a twitter account in my opinion. So I thought it was an interesting topic to delve into.

FCSyndicate: In good terms and bad, what are some of your biggest criticisms about action films nowadays compared to the last thirty years?

Aside from my issues with cinematography and editing, in the last 10 years or so, there has been a focus on making action films “grittily realistic”. I’ll say it now, this is a mostly stupid notion. Sure a film can be gritty and tough (some of the best films are), but as an action fan if I wanted realism I’d watch a documentary. I want escapism and fun. But primarily, I want to be able to SEE the damn action scenes. But another key issue has been the rise in this bizarre need for action heroes to talk about their feelings and be vulnerable. Because apparently, action heroes are girls. Lee Marvin didn’t have to talk about his feelings in films. Because he was a man. Punisher: War Zone got it right. Taken got it right. Dredd got it really right. Virtually every other action film in the last 10 years has got it wrong. As an example, in Expendables 2 Liam Hemsworth’s character talks so much about his feelings in the first 20 minutes that when he was killed I was thoroughly overjoyed… As a side-note, some people didn’t like Punisher: War Zone. Those people are idiots.

FCSyndicate: Who has been your biggest influence on your career to date?

I’ve been influenced by great filmmakers including Sam Peckinpah, Walter Hill, John Frankenheimer, John Woo and Luc Besson, but additionally I draw great inspiration from great directors such as Isaac Florentine and Jesse Johnson. I’m a big fan of their work and they’ve been very supportive of me. I’ve also been lucky enough to receive advice from friends such as Darren Shahlavi and Gary Daniels. They’ve been inspirational to me.

FCSyndicate: Are there any filmmakers you look forward to working with in your career?

I’m a big fan of Ross Clarkson who captures action sequences so well, and editors such as Irit Raz and Stuart Baird. Additionally I’d love to work with producers who really understand the genre.

FCSyndicate: What’s the worst movie you have ever seen? And why?

hat’s a huge question but on balance I’ll go with The Cold Light Of Day. There are many awful films out there, but you can normally rant about them because they are memorably irritating. I saw The Cold Light Of Day last year. And I have absolutely nothing to say about it.

Ross also took the liberty of stating that Man Of Steel looked a bit “depressing”, but expressed he still hopes it will bw a fun film when it comes out this year.

Progress on Warrioress has been a few years in the making, with production having begun in 2011 with its own set of challenges to bear, including a  rigorous outdoor shooting schedule with what Ross describes as “treacherous conditions”, no money and virtually no prep time, barely any crew, and no sound recording equipment or sound recordist available, and more. But therin, however, lies a unique sense of accomplishment when reflecting on the film’s hectic production. Ross expressed to me what he felt were the best and most rewarding parts of his experience in making Warrioress with his small, yet decidated crew:

Finishing it. Seeing it come together and having festivals like Action On Film tell us they want to screen it. That blows me away.

But the most rewarding thing is actually just how many people in the cast and (tiny but amazing) crew came and helped us. Enthusiastic, talented and hardworking people that did not have to help, but they did and we can never thank them enough. 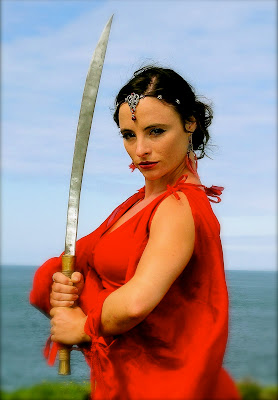 One of those people includes stuntwoman, actress, creator and founder of Babes With Blades, Cecily Fay, who has been a professional ballet dancer since the age of 11 and a 20-year veteran of expertise in Pencak Silat (sound familiar?). Warrioress was Cecily’s personal project; Not only does Cecily star in the film, but she also wrote, produced, provided the music and choreographed the action sequences along with the help of martial arts stunt performers and actors Joey Ansah and Christian Howard (sound familiar?).

From here, Ross details what fans can expect from Warrioress’s high impact action:

Loads of fighting and a BIG bodycount! Cecily primarily utilizes Silat in her fights, which is very aggressive, but we also have Wushu from the dynamic Helen Steinway Bailey (now one of the most successful stuntwomen in the world), loads of weapons including swords, staffs, archery, and even a whip-chain fight with Zara Phythian. There are more than a dozen fights in the film, including some stand-out fights co-ordinated by Joey Ansah (The Bourne Ultimatum) and Christian Howard. They both did amazing work on the film, including Chris appearing as various masked villains. And you’ll actually be able to SEE all of the fights.

When asked, Ross’s description of his working relationship with Cecily is nothing short of uplifting and possitive:

We hate each other with a blinding intensity that threatens to collapse the sun. She works incredibly hard and is amazingly talented. She starred in the film, wrote most of the script, created the costumes, choreographed most of the fights, and created every note of music.

On top of two sequels and a proposed TV show in the works, Ross also shared a few more projects in store for fans and film goers alike:

Tower Of The Dead is an OTT action horror, which starts out as a shoot-em-up and becomes a survival horror. Hoping to film it later this year. The Executioner is a gritty action-packed revenge thriller which will shoot in the Summer if Tower isn’t up and running by then.

There is no word yet on when the film will get its release, so frequently visit the official website, www.warrioress.co.uk and be sure to follow the film on Facebook and Twitter as well for further updates. You can view the trailer below or click HERE if the embed fails to load.

Thank you for taking some time to share some words with me!