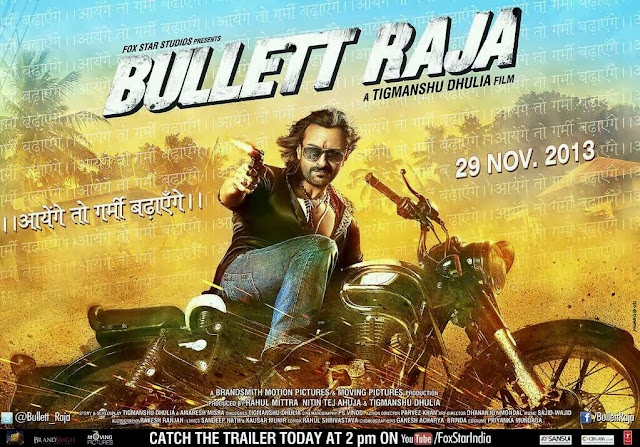 The film also stars Sonakshi Sinha, with Jimmy Sheirgill, Chunkey Pandey, Gulshan Grover, Raj Babbar, Ravi Kishan and Indian action hero, Vidyut Jamwal who is coming off the Fantastic Fest premiere of his latest martial arts spectacle, Commando: A One Man Army, for which a sequel is also expected.
Bullett Raja will get its theatrical release on November 29, 2013.
SYNOPSIS:

Bullett Raja is an action entertainer that shows Saif Ali Khan in a never before seen avatar. He essays the role of Raja Mishra a commoner who gets transformed into Bullett Raja – a notorious, care a damn attitude gangster. A faithful friend and a loyal lover, living life on his own terms, setting his own rules, commanding respect and fearing no one, Bullett Raja in his true inimitable style takes on the system that creates people like him in a compelling struggle for power and ambition. With a story that’s engaging with twists and turns this promises edge of seat entertainment with Saif Ali Khan in and as Bullett Raja.

Its got drama, its got romance, its got action – its hot! Kyunki Bullett Raja Aayenge toh Garmi Badhayenge!