Zombie Thrillride, TRAIN TO BUSAN Is Up For A Remake 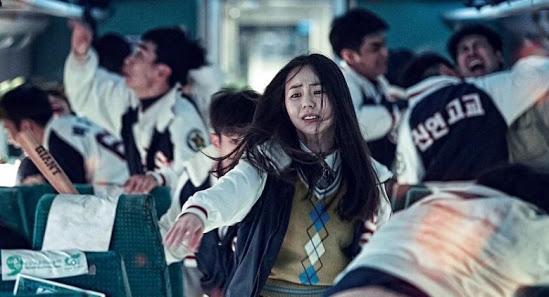 The past 24 hours have been electric with echoes of a possible reimagining of filmmaker Yeon Sang-Ho’s hit zombie thriller, Train To Busan. That news now comes by way of THR‘s Heat Vision column who report of a bidding war now underway between Sony, 20th Century Fox, Gaumont, Canal+ and EuropaCorp and others pursuing the rights to the film.
As a follow-up to Yeon’s 2014 animated movie, Seoul Station, Train To Busan sees actor Gong Yoo (The Suspect) as a father struggling to reconnect with his young daughter, only to get swept into an epic battle for survival when a mysterious viral outbreak consumes the Busan-bound bullet train they’re on. The film opened in South Korea and in select territories in the U.S. last month, and much to our delight as shown in the film’s expedient box office returns, beating Jon M. Chu’s Now You See Me 2 and the 2014 high-seas thriller, The Admiral: Roaring Currents.
The report also cites Danny Lee, the senior manager of the film’s international rights arbiter, Contents Panda who hasn’t confirmed the specific names of the companies involved in the current negotiations now underway and suggests that there is no rush to an immediate deal during the film’s theatrical run this summer. He also reportedly states that French studios are a bit more keen on this kind story since bullet trains are more prevalent in Europe.
It’s worthy to mention, however, that no matter which direction the film goes from this point, the biggest loser here may very well be filmmaker Arne Venema who took a particular project to a Korean film fund two years ago, testifying to similarities between his own treatment and what he saw in the first trailer a few months prior. (H/T: City On Fire) It’s unlikely that he may be involved in the remake some capacity but we’ll learn more soon enough as the months pass, and at any rate though, hopefully Venema will be vindicated in due time with his own creative vision.
Stay tuned for more updates!