There’s no question going into director Scott Mann’s latest, Final Score. Hailing actor Dave Bautista in his second outing with Mann since the 2015 film, Heist, you get a solid, simple, genuine and bare-bones hostage flick with some really cool and fun moments and thrilling sequences.

Similarly, might also wonder if Mann ever pondered a scenario in today’s era where a film in the vein of John McTiernan and Peter Hyams might earn the appeal of twenty-something moviegoers today. It’s an admirable idea worth discussing, although with Final Score playing front to back, it doesn’t change the fact that you’ve probably seen this movie already. Whether or not that’s a good thing is up to you to decide…

Clearly taking a nod from action cinema of yesteryear is a story that reunites Mann with his fellow Heist co-star, actor Dave Bautista in the role of Michael Knox, a traveling ex-soldier arriving in the U.K. to revisit his surrogate extended family. Eager to further establish a filial bond with Rachel Holloway (Lucy Gaskell) and her rebellious, grounded daughter, Danni (Lara Peake) in the wake of a long-endured and tragic family loss, he implores Rachel to let him take Danni to a West Ham game that evening. Once they arrive and with the start of the first quarter, Danni soon goes missing – a situation that only worsens when Knox realizes what’s happening in the atmosphere of the stadium.

Desperate to find Danni, Knox turns to Faizal Khan (Amit Shah) a stadium usher who has dealt with more than his fair share of racial animus from the locals despite being one himself. With walkie talkies as the only available means of communication, a failed attempt to reach the control tower soon unravels a deadly truth that lands Knox directly in the crosshairs of militant terrorists who have seized all areas and floors of the stadium with no way in or out, and a cluster of C4 blocks ready to go off at any minute before the night is over.

Orchestrating the calamity is Arkady (Ray Stevenson), a former general now out of prison and on a mission to find his long lost brother, Dimitri (Pierce Brosnan), the former charasmatic leader of their militant rebellion long thought to be dead. It isn’t long before Knox is forced into a corner with a strategy that finally gets the local police involved, but the stadium is on lockdown and with Danni missing and the chief of police (Ralph Brown) mired in politics with a special agent (Julian Cheung) hailing caution to potential catastrophic unrest in Eastern Europe, time is running out.

Jonathan Frank (The Tournament, Chaingangs, Mara), and brothers David T. Lynch and Keith Lynch (Trial, Old Habits, Dual), craft a stimulating script that harnesses performances that are enthusiastic and entertaining from our cast. Bautista has grown his craft immensely as an actor as he shares tremendous chemistry in the role of Knox as Danni’s uncle.

The underlying affliction he bares in his regret for the loss of a life that has affected his family in his years since soldiering on the battlefield is explored only a few major times throughout the film, while also proving plenty in forging sympathy for Knox in his struggle to connect with Danni at first. The two share distinctively different opinions on matters of military service and the meaning of self-sacrifice, a concept that has grown more difficult for Danni to comprehend as she contends against her mother and ultimately, Knox.

Peake’s performance is witty, unwavering and stubborn in her youth, and with a touch of nuance later embraced in the third act that helps bring the narrative full circle. Brosnan, whose role is prefaced at the top of the film in a robust and energizing intro loaded with wartime flashbacks and scripted dramatizations, stands among the cadre of stronger actors appearing principally in the third act as Dimitri with ample time for dramatic exposition opposite Bautista, and in prime fashion with Stevenson as the relentless and ruthless Arkady.

Amit Shah’s performance as Faizal Khan is an acquired taste if you’re not too into underdog sidekick characters. Khan is intially helpless when the tough gets going in a hail of bullets and bloodstains, but redeems himself favorably in a few ways before long. The film’s handling of stereotypes regarding Shah’s role almost dissonant in trying to keep up with its satire in a post-Brexit era. It’s a move otherwise well made that pokes fun at racism with a fun character that eventually passes muster for the action movie crowd.

Action scenes are largely relegated to rudimentary gun fights, thankfully peppered with a few explosive sequences and moments, the biggest and best of which are high-speed chases. One scene in particular sees Knox running the sidelines while tackling through guards to try and save Danni in a key moment. The film later has our terrorists in hot pursuit of Bautista as they zoom down the concourse and into the outer skeleton of the stadium on motorcycles.

Any fight scenery is comprised of a little shakycam joined by some steady lensing between the cuts which may bode as rather testing for critics of screenfighting. Bautista gets to trade blows with Martyn Ford in a deadly three-way kitchen melee that sees one guy losing his fingers and getting burnt to a crisp, and another guy stabbed in the throat something fierce before getting a full-facial meltdown – It’s pretty gruesome reveal that sets up another deadly showdown in the second half.

What might prove problematic isn’t so much the execution of the film, but its packaging. Indeed it’s a different film that ultimately plays on a familiar story formula that might not play well for some viewers. That being said, the fact that the film is largely well-polished, acted and executed in its drama and spectacle with its foremost star in Bautista makes it redeemable in its own right.

Mann is perhaps one of the best filmmakers I’ve enjoyed in the last ten years. The Tournament was especially a blast with some of the most high-octane moments a moviegoer could take in, and the addition of Bautista hasn’t undone his progress in the least.

Final Score isn’t the Sudden Death tie-breaker you might’ve preferred it to be, but it’s still the Die Hard guilty pleasure you’re more than welcome to endulge. 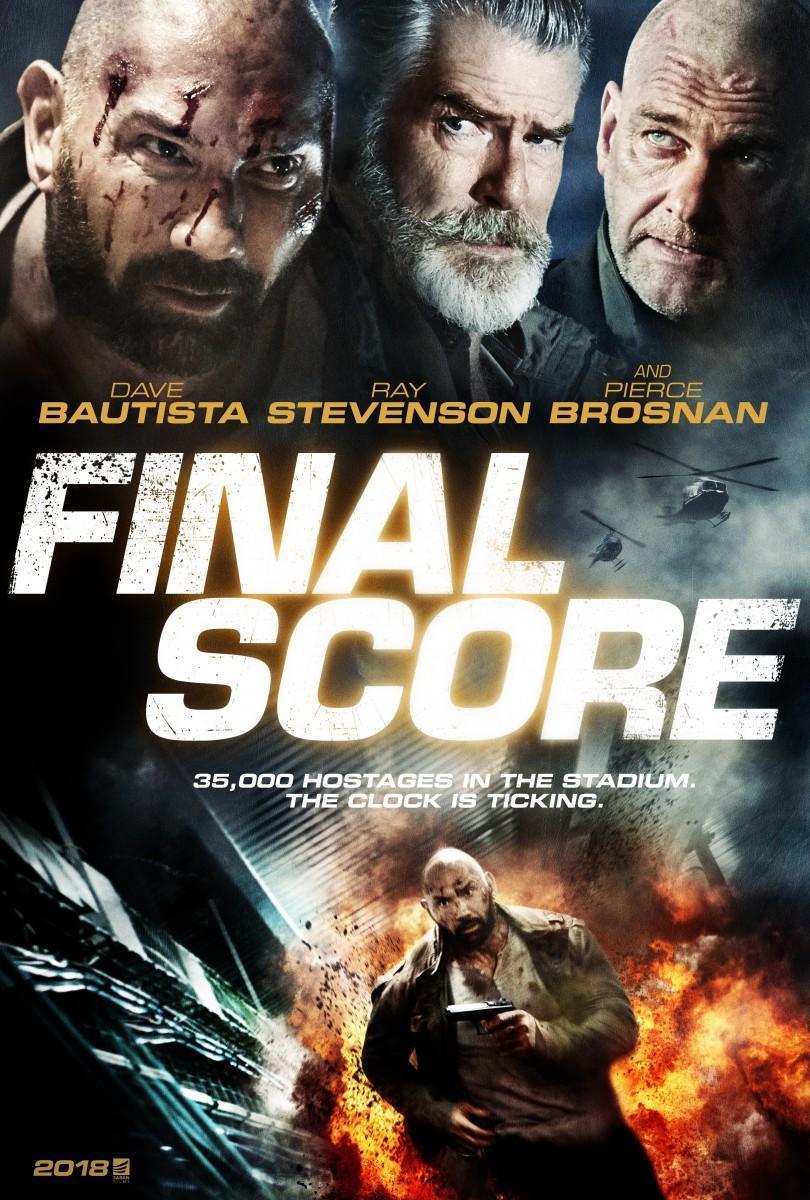