Filmmaker Herman Yau returning to the director’s chair for a sequel to his 2017 thriller, Shock Wave, was the smart thing to do, particularly if the intent was to do something different with the same actor getting top billing. For fans of actor Andy Lau in this case, there shouldn’t be too many complaints – by the time he shot this movie, he’d been an entertainer for close to two-thirds of his life, and at 59 years young, he’s still killin’ it.

In Trinity CineAsia’s upcoming home release of Shock Wave 2: Hong Kong Destruction, Lau toplines once more for a story that doesn’t keep you on your toes too long before smacking you in the face with something violent. And by “smack”, I mean the up-close-and-personal view of what a vast airport facility looks like as it’s blowing up from the inside out. It kind of reminds you of the sort of shit that’s been seen in not-too-recent viral video history. Granted, there’s just a little gamey CG involved but it doesn’t take much away from what we’re being shown, and you can’t really remove how real it feels either.

The scene is a foreword meant to preamble the story of Poon (Andy Lau), an elite EODB officer who serves as one of the best of the best of the Bureau when it comes to bomb disposal. One day, that all changes when he loses his leg – the movie doesn’t immediately reveal why, but rather it dives right into a montage of his training and recovery, aided with the recurring visits of colleague and best friend Tung (Sean Lau), before cutting to a masked Poon planting a duffel bag into a locker for someone to collect. Things take an explosive turn from there as you’re left with nothing more than even more mystery as to what is happening in Yau’s Shock Wave 2: Hong Kong Destruction, but one thing is clear.

I’m kind of brought back to my thoughts on The Man From Kathmandu starring Jose Manuel. If you’ve either read my review and/or have seen the movie, you can kind of get an understanding of what kind of character Yau delivers in Lau’s portrayal of Poon. A post-911 world has left quite a few people unforgiving in this day and age, and to that end, it’s interesting to see Yau’s efforts here in creating a character that bodes with more than its own share of nuances and complexities. 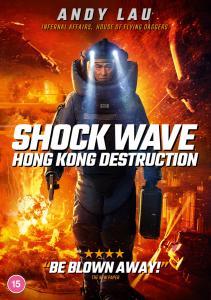 For all intents and purposes here though, you get a character worth rooting for in a story plush with controversy and sprinkles of melodrama dating back to childhood origins in flashback sequences, and moments of thrilling action and entertainment that aim purely high with Lau front and center as the star of this movie. From riveting gun battles to harrowing footchases and daring moments of danger, you get a protagonist in Poon whose flaws are inherently picked apart as the story progresses, while left beholden to the mystique that unravels beyond his ailments and into the broader twist of things that will ultimately allude to even greater stakes to come.

Of course, this all comes at the cost of viewer apathy and upset; The character of Poon, no matter the depth of his friendship with Tung, of his relationship with elite counter terrorism agent Pong Ling (Ni Ni), or even his own introspections in the wake of it all might rub some off the wrong way. Invariably, the film doesn’t go so heavy-handed on this aspect of story throughout its development and recapitulation to the point where it becomes insufferable. Yau manages to avoid this with a steady balance between escapist thrills that sell exactly what’s on the tin, amid a fitting character drama that pulls the curtain back some in a few discernible ways, with Lau in a role that doesn’t saturate you with the usual cinematic heroics.

There are no exact solutions for all instances here, and I digress from speaking to them. What I CAN say, however, is that there is plenty to enjoy in Shock Wave 2: Hong Kong Destruction to Yau’s credit, as well as to that of the cast. On its imperfect face, it’s a more human Hong Kong action thriller – one that removes the pristine image of heroism and staves off being too palatable, leaving moviegoers an action thriller that still manages to save what’s left of the day.

HARD HIT First Teaser Leaves All Intensity In The Driver’s Seat SPARE PARTS Review: The Sum Of All Its Parts, Covered In R-Rated Gratuity And Glee