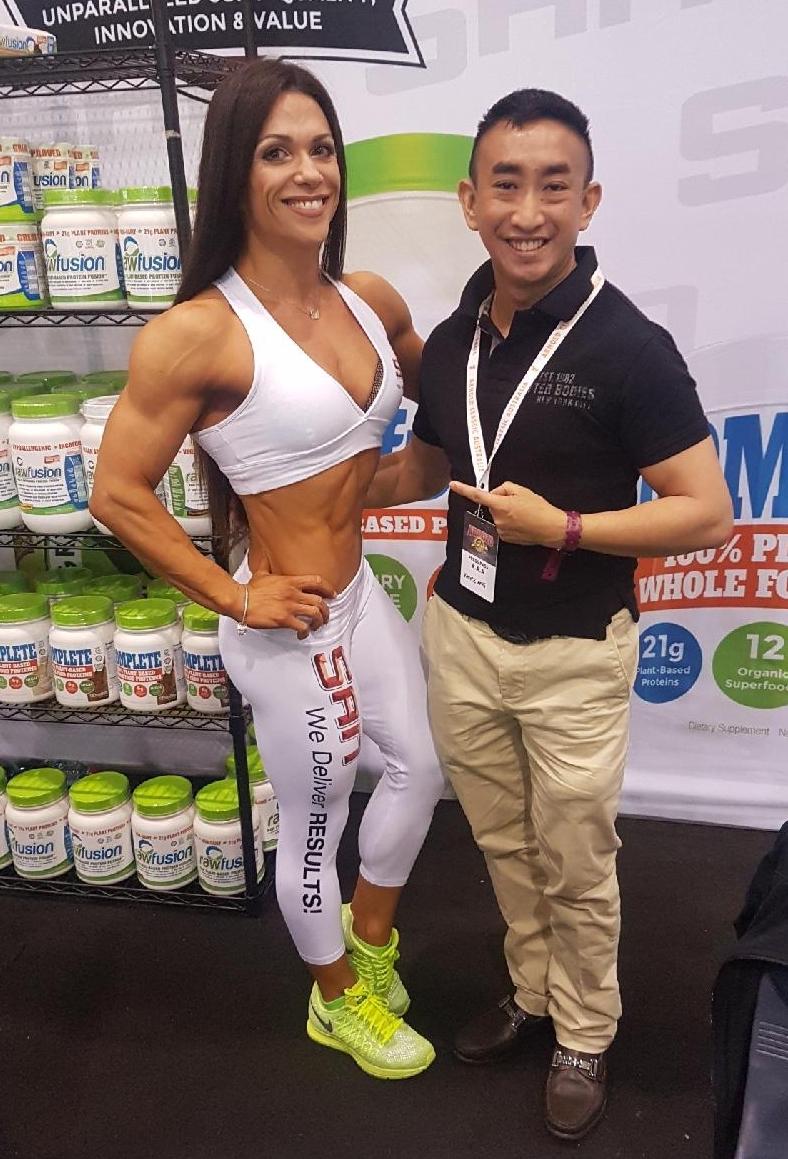 Unequivocally, this piece is completely inspired by FCS Founder Lee Golden, whose ‘HIT LIST’ is a comprehensive means of promoting show-stopping talent from around the world. Yet it is within this framework, the term ‘show stopper’ is effectively applied to the talents of IFBB Pro League Fitness Pro, Oksana Grishina.

It may seem pertinent to immediately annotate a biography, an origin story of sorts but at this juncture and for the movie pundits that ravenously read this platform such would be redundant. A more salient strategy would instead be to highlight a movie related theme. This four time Ms Olympia winner and 10 time Arnold Classic Fitness titles winner has forged an additional path – making a foray into acting. It is something that hasn’t been explored within the context of mainstream movies, and hence the purpose of this analysis.

As someone possessing genuine journalistic pedigree covering this sport for over 15 years, it is easy to confirm that a portion of bodybuilders, figure and fitness professionals will pursue a career in mainstream media.

After all, the sports’ greatest success story, Arnold Schwarzenegger proved with fierce contention that a bodybuilder can truly achieve excellence beyond the sport. Where film and movies are concerned, Arnold redefined and revolutionized the action movie genre, having established numerous genre tropes that today are either replicated or taken for granted. With that cinematic precedence in mind, it would be fair to assume that the action genre (or any physically demanding media) would be the most apt avenue for the stars in this sport. Indeed, notable champions over the years have pursued this specific genre with varying levels of success.

Yet the dynamic Oksana Grishina, opted for a completely different route.

Where this transition is more striking is in the path that she has selected, with irrefutable evidence in her actual Show Reel. Rather than relying on her unparalleled physicality, flawless physique and incomparable beauty she has opted to flex her thespian muscles instead. The results are certainly as impressive as the multiple stages she has dominated with her creative flair.

Those of us within the sport, are privy to her exceptional level of excellence that transcends the stage, and with it broadens her appeal. Iconic Australian Bodybuilding Pioneer, founder and promoter of the Arnold Sports Festival Australia Tony Doherty said it best when he stated (in 2017) that Oksana has “Raised the bar in fitness…and will be remembered forever.” Everything about this Pro athlete defined an utmost perfection, with the skill and artistry that leaves an indelible mark in the greater consciousness. Only the best, can achieve that.

For the uninitiated, the Women’s Fitness division offers something unique to a bodybuilding event. There is a combination of physical prowess that borrows everything from high level gymnastics, choreographed dance, martial arts and just overall entertainment. Yet in Oksana’s case, she intuitively selects a popular theme from contemporary pop culture, including (but not limited to) Michael Jackson’s BILLY JEAN, Darren Aronofsky’s ‘BLACK SWAN’, Christopher Nolan’s version of The Joker, and even Michael Bay’s Bumblebee from the ‘TRANSFORMER’ franchise! These have to be seen to be believed, evidently here is a beautiful Russian athlete, the epitome of physical perfection with the ability to captivate with creativity. From a journalistic standpoint, the standard practice would require this journalist to elucidate the intricacies of one of her routines – but again for this movie audience (who can easily navigate to these online) it would be a disservice to the athlete and to the essence of this analysis.

One could assume that this top level athlete, would utilize the very instrument to further elevate her career in movies and film, specifically the action genre. However, herein Oksana eschews such a simplistic notion and instead put her mind into honing her craft, that being within the fundamental pieces of acting – dialogue and expression.

When viewing Oksana’s show reel there is a real soulful quality to her and clear presence that is unwavering and magnetic. Her choice of monologue is the very same one that Marsellus Wallace (Ving Rhames) delivers to Butch (Bruce Willis), in the fight fixing negotiation scene in the now legendary “PULP FICTION.” Certainly, Oksana establishes a fearsome calm like Rhames, albeit with a different kind of smouldering intensity and being far easier on the eyes.

However, you’d be forgiven if you were unable to recognize this scene with any immediate recollection. As a viewer it is easy to be disarmed by Oksana’s exotic beauty and sultry accent, yet if you keenly observe and listen you will be impressed by how much confidence she exudes in acting. Adorned in stylish yet utilitarian attire, Oksana engages in a dramatic dialogue conveying a range of characterizations and portrayals. From this show reel one suddenly realizes that epiphany, that such an athlete is as compelling in a dramatic lead as she is on stage demonstrating superhuman physicality.

Equally impressively however is Oksana adapting a scene from ‘THE OFFICE’ (US), taking up the role of showrunner Michael Scott (Steve Carrell) in the smartly written sales tutorial between Dwight Schrute (Rainn Wilson) and Jim Halpert (John Krasinski). Though not intended to be a shot-for-shot remake, Oksana effortlessly delivers a similar tempo as Carrell’s character, yet nuanced enough to make it her own. It’s reminiscent of how she adopts the various aforementioned characters from pop culture and then treats these with reverence whilst applying her own unique style. Consequently, this goes beyond homage and elevates it to something unique and memorable.

As one of the most adored Fitness Pros the world over, Oksana had even featured in “America’s Got Talent” with a stunning performance, though deliberately more subdued than what many of us in the bodybuilding are used to. However in deconstructing this TV performance (a dance routine to Evanescence’s ‘Bring me to Life’) it was clear this provided the mainstream more than just a glimpse of what this sport can produce. Certainly, Oksana’s fellow Pro alum including (but not limited to) Ryall Graber, Whitney Jones and Kristine Duba – that is to say, the best in the business, also possess incredible public speaking and presentation skills that also lend well to other forms of mainstream media. Unquestionably, these top tier athletes boast the higher levels of versatility, with some like Oksana pursuing other disciplines to achieve as much as to impress.

My own journalistic endeavours in this industry had afforded me valued opportunities to meet Oksana in person at various events (most notably numerous iterations of The Arnold Classic Australia). The Pros in this coveted federation have an innate knack, not just in their physical presence alone, but in the way that they engage and interact with the multitude of fans or industry people. Personally speaking, Oksana Grishina is one of the few that remembers names from prior years – a fact that I attest to, but one that many of my bodybuilding contemporaries, media or otherwise, can also relate to. It is amongst her many traits that made her a favourite amongst her legion of fans, but taking note of that which she can do, beyond this sport truly reveals something equally as special.

Undoubtedly, Oksana could be a superb inclusion in any action movie. One could envisage her as the new Red Sonja, the MCU’s She-Hulk, a powerful female presence in a Bay or Bruckheimer film, or even a femme fatale in an upcoming Bond movie. The important consideration here is to avoid the mainstream trope of relegating her to a cameo; instead it would be more fitting to explore the recesses of her legitimate thespian ability and pursue a leading dramatic vehicle.

Oksana’s versatility would, in this journalist’s opinion enable her to flourish. This Pro athlete’s versatility is a clear indicator, that she is for all intents and purposes a modern renaissance lady that can shine in other forms of media.

Her efforts echo the sage philosophy of Arnold Schwarzenegger himself who once said:

“The meaning of life is not simply to exist, to survive, but to move ahead, to go up, to achieve, to conquer.”