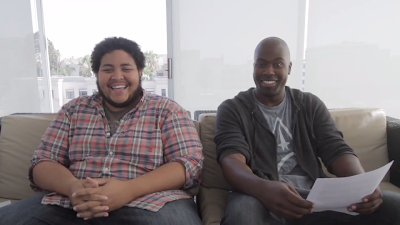 Independent filmmakers Haile Lee and Chris Cowan (pictured) have unleashed a brand new conceptual clip titled Eagle’s Prey, to illustrate what awaits fans in the upcoming epic action series, Clandestine Path. The series, an original fantasy story centered on martial arts clan warfare in a modern day setting, is but one of many awe-inspiring projects from Chris and Haile‘s dynamic independent action film group, Thousand Pounds Action Company.
The new clip comes just a month after a rousing show at this year’s Anime Expo at the Los Angeles Convention Center, where Thousand Pounds members, including select cast and crew members of the upcoming series shared their previous work, as well as exclusive new clips related to the series. 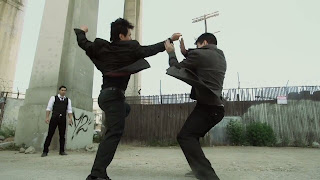 In addition to this, the clip also comes in light of a bold effort by Chris and Haile to cement the show’s potential by bring it to television for more broader and episodic storytelling, which they revealed in a recent fan Q and A video they hosted this week. “…We figured we’d aim for the stars on this guy, (or) scale back to web if need be.” Chris says. “But we are trying to take this series to television, and that is why this process has been a slow one-because it’s never fast getting anything to TV in general, but we are…we’re trekking very hard trying to get that.” This is a pretty important announcement, especially for anyone who has been around for more than ten years enjoying the inspired action shorts posted online by earlier stunt teams and independent film groups such as Zero Gravity, The Stunt People, Whirlwind Action, Montanick Pictures, Jabronie Pictures and Team FistyleZ to name a few.

For most, the goal of these teams, in general, were to make movies with great action, acquire bigger budgets, learn the trade, become stunt performers as a means to gain clout and become filmmakers or actors, or whatever they wished to pursue. Martial arts fans see these efforts as some filmmakers have already successfully tapped into the theater, DVD/Blu-Ray and digital market, including (bit not limited to) filmmakers like Eric Jacobus (Contour [The Agent]), Micah Moore (Dogs Of Chinatown), Nathyn Masters (Wages Of Sin), Fernando Huerto (The Jabronieverse), Jose Montesinos (Barrio Brawler) and Micah Brock (Slug Street Scrappers). That said, a move into television for any independent filmmaker group will definitely stretch the potential here for independent film and may even pave the way for other film groups to be able to achieve the same, ultimately reaching beyond martial arts cinema netizens, to possibly millions of television households nation and worldwide. 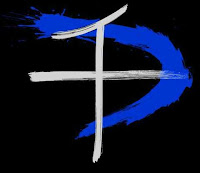 For now though, with the choice being up to the studio lucky enough to grab onto the fine gems that Thousand Pounds Action Company has to offer, one can only hope.

Eagle’s Prey stars actor and martial arts choreographer Brendon Huor, along with performances by actors Xin Sarith Wuku, Yoshua Yoshi Sudarso and Junchang Lu. Watch the full 23-minute Q and A segment hosted by Chris Cowan and Haile Lee to learn about the series, its story and more by clicking HERE.
For more information on how you can follow further development of the series and other projects, visit the official Facebook, Youtube and Twitter pages for Thousand Pounds Action Company. Follow Clandestine Path on Facebook and Twitter as well.
SYNOPSIS:

Clansmen live their lives perpetually looking over their shoulder, wary of constant threats from friend and foe alike. A solitary and, at times, harrowing existence that takes its toll on the men and women within the clan. For the youngest Eagle son, Baruti, this lifestyle was one that he could no longer stand.

7 years prior, the Eagle runaway was betrayed and deeply hurt by his older brother Samson. This betrayal resulted in the loss of a very important soul, Baruti’s motherly guardian. Since that day, Baruti has traveled the world looking for who he “really” is and has fought with coming to terms with his loss.

In present day, upon hearing the sudden news of his Father’s assassination, Baruti agrees to reunite with the people he once called “family”. Baruti’s return could mean several things to his older brother Samson: forgiveness due to a new found threat from an unknown common enemy….or perfect timing to exact his revenge for past wrongs. Believing in their age old saying, “Fighting eagles tend to both fall…” Samson reassures himself and agrees to meet Baruti to confirm what his true intentions are…

Danny Trejo Faces Knives, Machine Gun Bras And A Billionaire With A Rocket In The New Trailer For MACHETE KILLS R.L. Scott Tapped To Bring Yen-Style Action In THE SMUGGLER