Filmmaker Justin Lin is slowing down and putting the breaks on directing the upcoming seventh installment of the Fast And Furious film franchise. According to several reports, the filmmaker whose films have grossed over a billion dollars, including the colossal success of the previous three Fast And Furious films he directed, is stepping back from the director’s chair on Fast And Furious 7, citing the heavy workload between between films considering Universal wants the next film to start right away.

As Universal is currently fishing for a new director, Lin is also attached to a new project for Warner Bros., based on a trilogy of action novels written by author Patrick Lee.
Fast And Furious 6 sees the ensemble cast of returning actors Paul Walker, Vin Diesel as Brian O’Connor and Dom Torretto, two outlaws who escape to newfound freedom when DSS agent Luke Hobbs, played by Dwayne “The Rock” Johnson, locates Dom and his crew to recruit them to take on a dangerous mission in exchange for full pardons and a way back home to make their families home again. The film also stars Tyrese Gibson, Michelle Rodriguez, Christopher “Ludacris” Bridges, Jordana Brewster, Gal Gadot, Sung Kang, Gina Carano Luke Evans and Joe Taslim, in addition to a special appearance by singer Rita Ora and a cameo appearence by action star Jason Statham.
Fast And Furious 6 will ride its way into theaters on May 24, 2013.
Photo Credit: ZimbioUPDATE (6:53pm EST): Below is the official one-sheet for the film, courtesy of Michelle Rodriguez via Facebook. 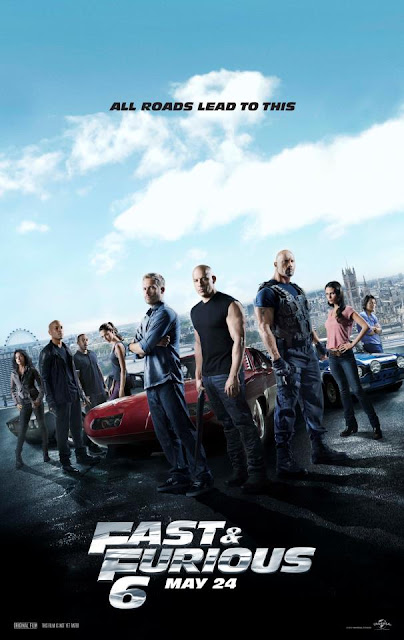