Watch The Final Trailer For KILLERS! 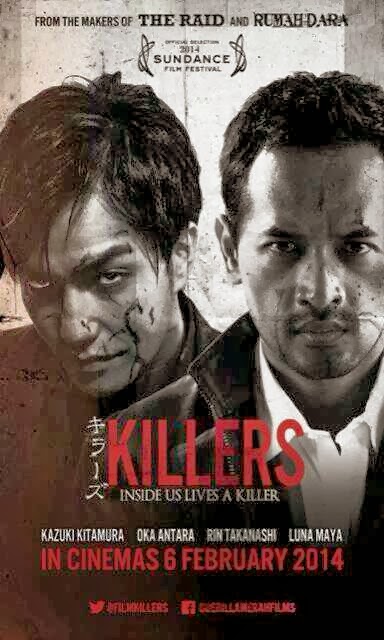 Ahead of its four-night run at this year’s Sundance Film Festival premiering January 20, 2014, we have a final trailer for the “Mo” Brothers’ upcoming thriller, Killers. The latest collabroation between Nikkatsu, Merantau Films, Guerilla Merah Films and XYZ Films, Killers presents a bone-chilling international story of two men from different areas engaged in an online bromance made in murderous, bloody hell.

Set for a theatrical release in Japan and Indonesia on February 1 and 9, respectively, Killers stars Kazuki Kitamura and The Raid 2: Berandal‘s Oka Antara, with Rin Takanashi, Luna Maya and Ray Sahetapy. The film was written by Takuji Ushiyama, and produced and directed by Kimo Stamboel, and co-writer Timo Tjahjanto.

Mr. Nomura is an eerily handsome, sharply dressed, sociopathic serial killer who preys on the women of Tokyo. In Jakarta, a world-weary journalist named Bayu finds himself unexpectedly falling into vigilantism after brutally killing two sadistic robbers. When each posts videos of his violent sprees online, the pair find one another on the Internet and begin a toxic and competitive duel. While Bayu clings to the hope that he can resume a normal life, Nomura continues to spill blood without remorse. Killing, advises Nomura, is something everyone ought to consider.

Timo Tjahjanto, codirector of the V/H/S/2 segment “Safe Haven,” returns to Park City at Midnight, collaborating with longtime filmmaking partner Kimo Stromboel on their bleak and blood-soaked second feature as creative team The Mo Brothers. Killers uses energetic camerawork and a wildly varied musical score to vividly capture brutality in ways both bone-rattlingly frenetic and serenely transfixing, while always keeping audience members aware of their complicity with the characters’ own bloodlust.

Prepare For The New TV Spot For JACK RYAN: SHADOW RECRUIT The New Japanese Trailer For SNOWPIERCER Has Arrived!