REVIEW: CAPTAIN AMERICA: CIVIL WAR – What, Are We Supposed To Be Cool Now?

I should mention right out of the blocks why I chose the above title for this review. It is a nod to a scene in the movie that, I will swear upon at gunpoint, was a last minute reshoot to directly poke fun at Zack Snyder’s poorly received Batman V Superman: This Is Seriously The Title They Stuck With. You’ll have to see both films to get the joke, provided you’re not already keen to it by the flood of social media memes on the topic.

A good friend of mine called the film a watershed moment in moviemaking history, at once brazenly announcing itself as Marvel’s own The Empire Strikes Back (something Spider-Man actually says in one of the film’s biggest action set pieces) –an honor and boast the Russo brothers well earn for the quality of the proceedings. Not to mention their previous directing prowess showcased in Captain America: The Winter Soldier. No question, two of the best films so far in the MCU catalogue.

Scarlett Johansson seriously makes a case for her solo Black Widow film in this movie. You’d be forgiven for thinking she was the main protagonist of the film every time she graces the screen. A nod there to the fantastic stunt work by Heidi Moneymaker.
In fact, similar can be said everyone onboard. The cast shows up for serious business. Trent Opaloch delivers fantastic cinematography not wasted on a hackneyed script (cough cough Bv cough S). The score by Henry Jackman punctuates the narrative shifts and the big moments nicely. Awards should be in the cards for Jeffrey Ford and Matthew Schmidt for the enumerated engineering done in the editing room. And the unsung gravitas of the art direction by Gregory S. Hooper, David Scott, and supervisor Greg Berry was, in a word, exhilarant. 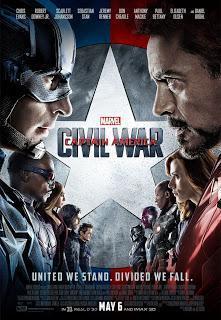 Captain America: Civil War is a must see at least twice. The first time, for an emotional and truly rewarding movie-going experience. And second, baby, to convince yourself that yes, yes…, this epic event actually occurred on my watch, in my lifetime.

The Year Hong Kong Collided With Hollywood THE HIT LIST – May 9, 2016