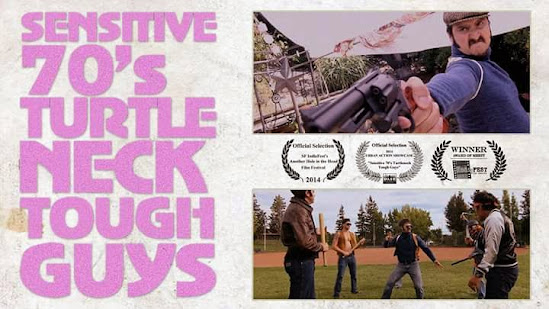 As practical as it is for filmmakers to make movies set within a specific decade or a certain period in time, there’s always been something admirable when a director’s vision harkens back to a time period as recent as the last five decades, particularly the seventies. To date, it’s an era most people can still relate to given how varying cultural aspects of that time frame have inspired quite a handful of the artists living today, and to say the least, directing duo Jose Montesinos and Brett Stillo clearly fit the category.

Their latest shortfilm, Sensitive 70’s Turtleneck Tough Guys, doesn’t have all the trimmings down, but it does hit most of the right notes to encompass the tone and level of satire embodying a project of this nature. Montesinos co-stars with actors and stuntmen Eric Jacobus and Troy Carbonel in a story that often switches between situation comedy and action adventure, centered on three badass private detectives who convene at a restaurant to wax philosophical on redefining masculinity while coming into themselves as sensitive men in the 1970’s.
This isn’t the first time Montesinos himself has dealt with decade-based storytelling as several instances of his own work in recent history include him playing a quite a few dated characters (look up The Winds Of Time on YouTube, definitely a favorite). On that note, I certainly hope it won’t be the last for such an effort that relies so heavily on a level creativity that comes so naturally between him and Stillo.
As always, the fights are fantastic and inventive between Montesinos and Jacobus who designed the sequences with co-choreographer Dennis Ruel. From a slightly more critical standpoint, most of the acting is good as well, although it comes across a bit better for Montesinos than Jacobus while I did find mysellf genuinely enjoying their on-screen delivery altogether. Carbonel isn’t left with much to do for a role with no lines although he does leave an impression of his own.
All in all, Sensitive 70’s Turtleneck Tough Guys is a cool little snapshot that presents yet another among many workable concepts from the independent film scene. It’s got a cool script with great talent on hand and I don’t think it would hurt to see this expanded into something larger. However, if we are relegated solely to shortfilm prospects, I sincerely look forward to what a follow-up entails, and especially because of the delight that fresh ideas provide. And for a short film like Sensitive 70’s Turtleneck Tough Guys…that ain’t no bull!
The shortfilm is currently making the film festival rounds and is expected to go online next week. If you haven’t seen the trailer, click here to check it out, or simply follow the project on Facebook.